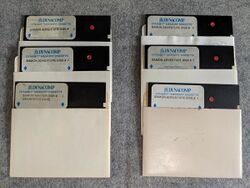 An adventure number is a unique serial number used to identify an adventure. The practice of numbering Eamon adventures began in the early 1980s and was continued by the National Eamon Users Club and the Eamon Adventurer's Guild who sequentially-numbered 255 adventures, with a smaller set of adventures either unnumbered or numbered in different ways. Currently there are 277 numbered Eamon adventures.

The Adventures Portal lists all adventure numbers and titles.

A single adventure that spans multiple diskettes normally has a single number. One exception is the The Search for the Key (#80) and The Rescue Mission (#81), which though numbered as separate adventures form two parts of a single story. Tom Zuchowski in the June 1989 issue of the Eamon Adventurer's Guild Newsletter notes that the two likely should have been listed as a single two-disk adventure, but since they had already been listed separately it was "too late to change it." The two are sometimes numbered as #80a and #80b.

Some publicly-available Eamon adventures did not appear in past lists or were numbered in ways different from the main series.

The seven adventures of the SwordThrust series follow the order assigned by CE Software.

Eamon Deluxe groups adventures together into numbered sets. The system's 25 current sets contain nearly all the known and publicly-available Eamon adventures, as well as some created for variants or other related systems. Some sets group together the adventures of a single notable author (e.g., 02, The Donald Brown Adventures); others group adventures by theme or style (e.g., 19, Worst of the Classic Adventures), or into general collections (e.g., 16, Classic Eamon Adventures, Vol. 4). A few sets contain only a single adventure (e.g., 22, A Runcible Cargo).

Each adventure in Eamon Deluxe has a number that consists of the two-digit set plus the two-digit adventure, connected by a hyphen. For instance, The Waiting Room is the fifth adventure in the seventh set (The Frank Black Adventures Deluxe) and is identified as EDX07-05.

In the early- to mid-1980s some distributors of Eamon adventures had their own systems for numbering disks that differed from that of the NEUC; two of these were the Apple Avocation Alliance (AAA) and A.P.P.L.E. Reproduced below are the latest available versions of their Eamon catalogs using their unique numbering.

This wiki identifies adventures using the same sequential numbers as assigned by the EAG. In the comparatively few cases where publicly-available Eamon adventures are not numbered as part of the main series by the EAG (Redemption, The Ice Cave, Land of the Mountain King, etc.), this wiki extends the sequence and assigns them main series numbers. The wiki follows this practice in order to more easily present all Eamon adventures together as a single set, and as an aid to navigation.