The Cave of the Mind

The Cave of the Mind by Jim Jacobson and Red Varnum is the third Eamon adventure and the first written by an author other than series-creator Donald Brown.

In correspondence with Huw Williams in 2020, Jacobson recalls attending Apple II computer club meetings at the Computer Emporium in Des Moines, Iowa beginning around 1978-79, and there meeting Donald Brown who was then an actuarial student at Drake University and a "groupie" of the store. "Sometime during 1980 Donald came in to the Computer Emporium with his new game, Eamon," writes Jacobson. "All of us were floored."

Since Brown's game included a "developer's disk" for creating new adventures, Jacobson decided to try his hand at building his own, and while deciding what the adventure's story should be remembered an idea he'd discussed with his friend and colleague Red Varnum. (The two met in 1977 when Jacobson bought his first Apple II from the electronics store where Varnum worked.) He recalls:

I had had conversations in the past with Red Varnum about an adventure that happened in the adventurer’s mind, rather than in a physical world. I created Cave of the Mind with that idea in mind, and I gave him co-credit for the adventure (even though I no longer worked for him.) I really consider that adventure pretty clumsy, but it was my first creative venture.

Jacobson says that when he brought in his completed adventure to show to the members of the club, he was very surprised and pleased at how excited they were, including Brown himself. After Cave of the Mind's success, Jacobson penned four more adventures. 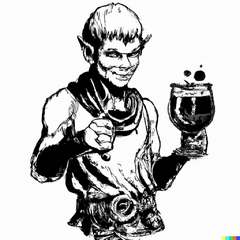 The mysterious man with the bubbling liquid. (DALL-E 2)

The adventure begins outside the Main Hall in Evenhold:

As you prepare for your next adventure, you meet a short little man outside the hall. He beckons you to see what he is holding. As you get closer, you notice a grail with a strange, bubbling green liquid within. In a strange low voice he says: "Most adventures are for normal adventurers. But you are special, and should try the most challenging adventure you could imagine." With a sly wink, he hands you the grail. You look at the potion, then back to the man — but he has disappeared. Not being one weak on courage, you raise the grail to your lips and quaff the potion.

You find yourself magically transported to a dimly-lit stone room from which you must start your explorations.

Contrary to the introduction's promise of extreme challenge, The Cave of the Mind is a straightforward outing with no particularly difficult elements to overcome, though there is one death-trap and a couple of interesting effects to watch out for. 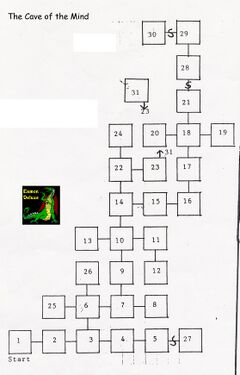 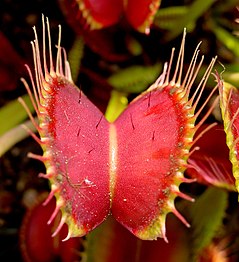 The Eamon Deluxe version incorporates new challenges and additions made by Frank Black, who states in the Eamon Deluxe Newsletter that roughly 50% of the revised adventure's content is new.

Reviewer Tom Zuchowski describes Cave of the Mind as "strictly for beginners and hack'n'slash fans", rating it a 3 out of 10, with a difficulty of 4 for beginners and much less for experienced players. The Eamon Adventurer's Guild rates it at 3.2, the average of seven ratings.

Reviewer Luke Hewitt however, reviewing the Eamon Deluxe version was far more taken with the adventure, awarding it an over all rating of 7 though still agreeing with the difficulty of 4. He praised the lighthearted and quirky atmosphere, plus the many colourful descriptions and affects, and enjoyed the surprises which both Jim Jacobson and Frank Black added to the adventure, including the addition of the title character "the Mind" itself as an overall antagonist.

Descriptions of the adventure's rooms and tunnels suggest the setting is a series of caverns, but (as the title hints) the story takes place not in the physical world at all but inside the adventurer's mind, something Jacobson confirmed in 2020. The potion the adventurer quaffs in the introduction presumably induces the illusion.