Revenge of the Mole Man

Revenge of the Mole Man is an Eamon adventure written by John Nelson and is sequel Assault on the Moleman.

Nelson notes in the Eamon Utilities documentation that he generated the basics of this adventure by copying elements from Assault on the Moleman through the use of the utility program Erase Art Eff Mon.

The adventure takes place some time after the events of Assault on the Moleman. From the introduction:

As you were talking to some adventurers at the Main Hall, you learned about a mysterious disappearance.

The village of Slobourough is completely gone. Where the village once stood there is a gaping hole in the ground.

You suspect only the villainous Mole Man could have perpetrated such a thing, but you do not know how to reach the villain so you go about it the only way you can.

You set off for the Marewood Forest to find the same quicksand that you found once before (by accident, actually).

Well, you've succeeded in locating the same spot as before and you were dragged into the bog. 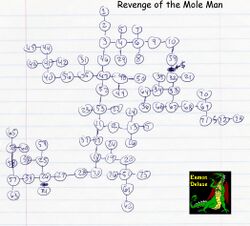