The Temple of Ngurct is an Eamon adventure written by brothers James Plamondon and Robert Plamondon in mid-1982 and released soon after. The adventure is notable for incorporating several custom-made features that were advanced for the time, particularly wandering monsters and other random or odds-based events. A sequel, Return of Ngurct, was written by Hoyle Purvis in 1991. 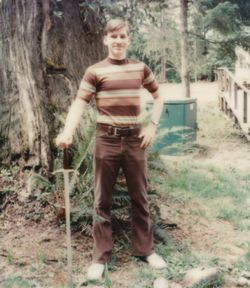 In correspondence with Huw Williams in 2019, James Plamondon recalls that Dungeons & Dragons was an inspiration for the adventure: "My brothers and I were hard-core D&D nerds, attending games weekly throughout college." James created the adventure probably in the summer of 1982 after graduating from Oregon State, but he notes that he might have started it over the previous Christmas break or spring break. Regarding the name of the adventure, he writes, "the name 'Ngurct' was the option that my brothers, friends, and parents found to be the least pronounceable, so I chose it. Temple of Sally just didn't sound ominous enough."

What I remember most is lists of entities on pads of yellow quadrille paper, which my father, the engineer, bought by the ream. Creatures, rooms, test strings, choices, everything had to have a unique ID number, and it was a pain in the ass to suddenly think, "Hey, it would be cool if I could just..." and then have to renumber everything. If I recall correctly, the items had to be numbered sequentially because they were array elements (but it was a long time ago, so I am probably wrong about that).

This adventure is one of only two written by James (the other being The Senator's Chambers) and the only published adventure by Robert. In his 1983 Call-APPLE article Robert writes that he "tinkered with the programs" while the adventure itself was by James.

There is an old ruin of a small citadel on a cliff overlooking a rarely used pass. The road through the pass has become increasingly hazardous in recent years. Now, only rash and desperate travelers — or those travelling in very large parties — dare to use it. Those who have survived the crossing tell dark tales of fearsome beasts and strange happenings; in all these tales the citadel is the eye of the storm.

It is rumoured that the evil priests of Ngurct have occupied the citadel; their foul creed worships the black demon of the same name. Ngurct is the patron demon of exotic monsters — and he requires the regular sacrifice of human unbelievers.

You have been hired by your king to eradicate this scourge, and make the pass safe for travel and commerce once again.

It is rumored that Ngurct himself abides in the citadel, though it is not known in what form. For your efforts, you will be paid 5,000 GP upon the return of the medallion. And, of course, you will get to keep any loot you find.

The adventurer arrives at the main entrance of the ruined citadel, ready to seek the medallion.

The citadel and its environs have two main sections to explore: first an above-ground area where the ruined remains of the citadel buildings stand, then a series of tunnels and chambers that run beneath it. You'll encounter both enemies and allies, and while some of them appear in fixed locations, others show up at variable times and places. Goblins, hobgoblins, orcs, guards, giants, or bugbears may randomly enter the room you're in to engage you in combat, while the friendly Sumata, Joubert, and Debbie may appear and join your on your quest.

Note that secret rooms or items may be revealed by using the EXAMINE command, but it's sometimes necessary to examine a room more than once. Also, monsters don't leave bodies behind, and other than their regular weapons don't drop anything else they're carrying, so don't loan your comrades any weapons you aren't prepared to lose.

"The stones and rubble are loose and dangerous." (Tower and ruined wall at St. Kevin's Monastery, Ireland.)

Ascend the stairs, make your way back to the main entrance, and ride off into the sunset. If Princess Thera was in your company, you'll receive 3,500 gold pieces for her safe return. If you have the medallion of Ngurct you'll receive a further 5,000 gold pieces from the king, who immediately destroys the item and breaks the power of Ngurct.

Thomas Zuchowski reviewed The Temple of Ngurct in the March 1993 issue of the Eamon Adventurer's Guild Newsletter, giving it a score of 7 out of 10. Zuchowski felt the Plamondons "did a really good job" with the adventure and praised the interesting additions and customizations they were able to make despite the relatively unrefined nature of the early Eamon system. He felt the adventure's difficulty was higher than normal, but it depended a lot on the player's choices and the adventurer's companions. Playing time was estimated at one to two hours.

Eamon Deluxe creator Frank Black included Temple of Ngurct as the first item in his Best of the Classic Adventures collection.

Hoyle Purvis wrote a sequel to the adventure entitled Return of Ngurct, one of five adventures by Purvis released in December 1991. Strange creatures and mysterious robed figures are again attacking travelers through the pass, and the king fears the medallion has been remade. He tasks the adventurer (and others from the first adventure) to return to the citadel and put an end to Ngurct once and for all.

The location of the mountain pass occupied by the Ngurct cult or its distance from the Main Hall are not made clear, though the king's concern about its effect on travel and commerce suggests that it lies within the kingdom, perhaps near its borders.