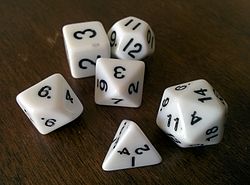 Dice (singular: die) are throwable objects used to generate random numbers, and a key feature of many role-playing games including the Dungeons & Dragons series that inspired Eamon. A die is normally a regular polyhedron with a number of sides equal to the desired range of the result; the most common number of sides are four, six, eight, 10, 12, or 20.

In the context of computerized adventure games like Eamon, terms like "dice", "sides", and "rolling" relate to randomization methods in the software. Unlike with real-world dice, such rolls can use dice with any number of sides; for example, the damage from a standard Marcos spear is determined by calculating a random number equivalent to rolling a five-sided die.

Eamon uses the standard notation terms "dice" and "sides" — "dice" referring to the number of dice rolled to find a result, and "sides" indicating the number of sides on each die. The two together are often abbreviated [dice]d[sides]. For example: 2d6 would mean a roll of two six-sided dice, which would produce a result from 2 to 12. 3d10 would mean three ten-sided dice, producing a result from 3 to 30.

Dice notation sometimes adds modifiers to a roll to change the range of the final result. For example: 1d6+3 would mean to roll a single six-sided die and then add three, producing a result from 4 to 9.

Various other values and results are also determined randomly or contain a random component, but aren't explicitly defined in terms of dice and sides. For example, about 5% of the time a hit with a weapon will be a critical hit, determined by generating a random number from one to one hundred. (Though not defined as such, this number generation could be expressed as 1d100.) 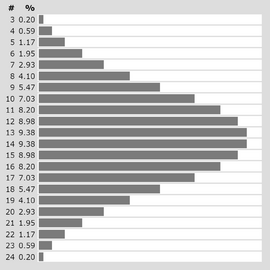 While rolling a single die should produce a random number, it's important to recognize that rolling multiple dice will not. As Brown notes in the Player's Manual, rolling 3d8 will produce a result between 3 and 24, but numbers toward the middle of that range will be more likely to occur than those at the ends. This is because (to take the 3d8 example) there are many possible combinations of the three dice that would total 12, but only one possible combination that would total 3.

Dice sometimes appear in adventures, often held by guards or other dungeon denizens as a way of passing the time between encounters. Guards in DharmaQuest, The Mountain Fortress, and Castle Mantru have dice, as do the orcs in The Iron Prison and a dwarf in The Last Dragon. Dice also appear in gambling establishments like Schmitty's Casino or the gambling joint in Ground Zero.