Apocalypse 2021 is an Eamon adventure written by Hoyle Purvis.

This is one of a group of five adventures by Purvis that were announced together in the December 1991 issue of the Eamon Adventurer's Guild Newsletter. Tom Zuchowski introduced Purvis as a new author specializing in combat-heavy adventuring and described Apocalypse 2021 as a well-built hack'n'slash adventure with minimal puzzles.

Released along with Apocalypse 2021 was its sequel, Lair of the Marauders, which Purvis based in part on The Lair of Mutants by Evan Hodson. The sequel sees the return of most of the key Marauder gang members, holed up in an abandoned military complex.

Wagramtown, a small community on a post-apocalyptic Earth, was recently attacked by a gang of criminal mutants and cyborgs who made off with many of the town's valuables and captured the mayor, his daughter, and the captain of the town guard, taking them all to the gang's headquarters in the town's abandoned high school building. The townspeople ask you to raid the school, recover their property, and free the captives, and promise you a great reward if you succeed.

This walkthrough doesn't take you to every room, monster, and artifact in the school but instead just hits the key encounters that will allow you to free all the captives and gather the most significant treasure. Those who prefer to see and do it all should consult the map below. Be sure to give each freed captive a weapon so they can aid you in combat; the enemies are not exceptionally difficult but are certainly quicker to handle with a well-armed team of allies. 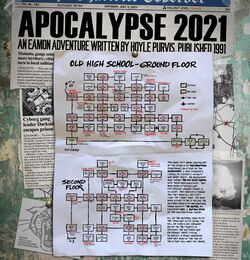 You begin south of the two-story school building where you find Adam, a local fighter who will join you on your mission.

The happy townspeople award you a generous quantity of gold pieces and throw a party in your honor.

EAG president Tom Zuchowski, reviewing the adventure in the December 1991 newsletter, called Apocalypse 2021 "a clean, solid adventure, refreshingly free of errors" and wrote that he greatly enjoyed some of the special touches Purvis added to the story. However, he disliked the institutional setting which made mapping a chore, and gave the adventure a somewhat reduced rating (5) because of his general dislike of hack'n'slash scenarios, though he thought fans of combat-heavy stories would probably rate it more highly.

Wagram is a real community in North Carolina, situated about 85 miles southeast of the city of Charlotte. The old high school stood on the south side of town at the corner of Main and First; after county school consolidation in 1968 students attended Scotland High School in nearby Laurinburg, and Wagram became an elementary and middle school. In the 1980s it was demolished and a new elementary school built on the site. 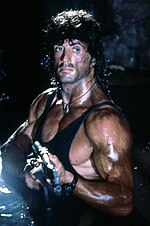