Malleus Maleficarum is an Eamon adventure authored by Keith Dechant, the creator of the Eamon Remastered system, notable for its special effects, its support for conversing and trading with non-player characters, its multi-stage plot, and for being the most recently released Eamon adventure. Malleus is also the first all-original adventure written for Remastered.

In correspondence with Huw Williams in 2020, Dechant recalls that he learned about the 15th century book Malleus Maleficarum the previous summer and that it gave him the idea for the adventure. "Rather than going with the overused 'damsel in distress' trope," he writes, "I decided that the damsel should be a fellow adventurer and the person in distress should be her grandmother, because older women were among the people most frequently targeted by witch hunts." He chose the name "Cobalt Front" for the villains both because the name hadn't been used before and because "cobalt seems like something that [anti-magic] equipment might be made from."

Dechant enjoyed building the system for speaking and trading with non-player characters, but also found it challenging because of the number of possible combinations and permutations that his code had to account for. ("What if Maya gets critically hit in the first fight? Can you still complete the adventure without her? What if you get arrested, escape prison, and have no gear and no money, but there are still monsters to fight? That kind of thing.") Dechant also had fun populating the ruined castle with a variety of plant-based monsters.

A novice guild member named Maya tells you she's worried that her grandmother, a healer and practitioner of magic, is in danger from a band of religious fanatics who have taken control of her home city of Virrat. You agree to help her find her grandmother and the two of you travel to the city where armed members of the militant Cobalt Front are harassing and arresting anyone suspected of using magic.

You begin at the south end of the bustling Grand Plaza of Virrat City with exits in all directions and members of the repressive Cobalt Front on patrol. Avoid using any magic spells or brandishing magical weapons in the presence of members of the Front since doing so will likely land you in prison. Remember that you can can talk to most of the people you meet (e.g., TALK TO MAYA); some have valuable information, and what they say sometimes changes over the course of the adventure. Remember too to save before major encounters; the enemies you meet aren't pushovers and even with allies at your side you may sometimes need to take a mulligan.

Maya whispers that her grandmother's house is outside the east gate. 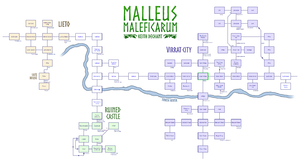 A map of Virrat City, Lieto, and the ruined castle.

If at any point you run afoul of the Cobalt Front and are thrown into a prison cell, you can escape through the window with the help of your wizard cellmate. Though the authorities will confiscate your weapons and armor, you can acquire new ones from the weapons merchant in Virrat City and the leatherworker in Lieto, and can recover your original gear later in the adventure. Should your companion Maya ever take enough damage to be knocked unconscious, Ainha will take her back to the safehouse in Lieto to recuperate; if Ainha isn't present, you can carry her there yourself.

The adventure takes place in the Duchy of Virrat, a fertile agricultural region whose capital is situated on the Tovesi River about three days' travel from Evenhold. The small farming village of Lieto, also part of the duchy, lies a few miles northwest of Virrat City.

The Cobalt Front is headquartered in the land of Nival.