The Caves of Treasure Island

Not to be confused with Treasure Island.

The Caves of Treasure Island is an Eamon adventure written by friends Paul Braun and Geoffrey Genz. Though it's the only adventure the two co-authored, each individually wrote an adventure of his own: Dracula's Chateau by Braun and The Caverns of the Sphinx by Genz. The adventure is notable for its graphical map, musical effects, and other custom features.

In correspondence with Huw Williams in 2020, Genz recalls first encountering Eamon in 1980 when he got a couple of game disks from a Denver-area Apple computer club, and soon picked up four more. Genz and his friend Paul Braun played these six Eamon disks "obsessively" and were inspired to try creating their own adventure.

If I had to guess I'd say we started it the summer between 9th and 10th grades [1980], but it could have been during our sophomore year. Obviously it was also before there were any real tools for developing your own, so that and our other two were crafted completely by hand... I know we dissected the Lemonade Stand game to figure out how to do the music by POKEing the right addresses for the speaker.

Once the adventure was complete, the two delivered The Caves of Treasure Island to the local club, and from there it made its way into the collection of the National Eamon User's Club.

The game opens with the following introduction:

The Adventurers Guild has elected you to rescue a captured adventurer. Recently the guild received a note in a bottle asking for assistance. The author explained that he had been taken captive on Treasure Island by pirates. Unfortunately, the exact location and name of the unlucky adventurer were destroyed by sea water. However, in the bottle was the following map. 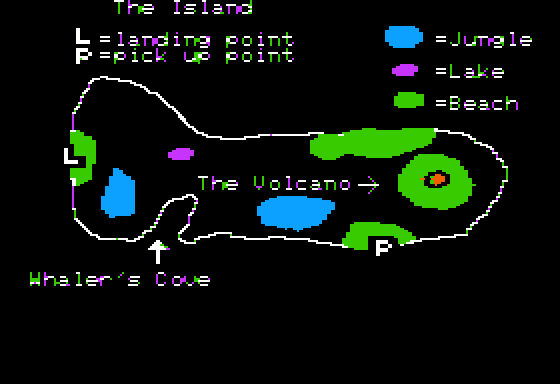 A word of caution: legends tell of hidden caverns with one-way passages and tunnels under the surface of the island. Also the water around is infested with man-eating sharks.

A ship will drop you off on the ship but it has other duties. Another is scheduled to land on the south beach soon after you are dropped off.

You begin on a sand bar on the west side of the island, the ship that delivered you having just departed.

To successfully complete The Caves of Treasure Island you must collect a few necessary items in the right order; this walkthrough lets you collect those pieces, potentially make some early allies, and experience every (survivable) feature, but since there are three western entrances to the tunnels and multiple connections from point to point, it's only one of several possible approaches.

The rooms you'll be making your way through are dangerous and contain multiple death traps, so proceed with care. Note too that the Deluxe and Remastered versions of the adventure start you with a companion, Terry the Pirate, a chatty and inebriated sailor who'll accompany you as you explore. These updated versions also feature occasional, quippy asides added to some of the descriptions by Deluxe creator Frank Kunze ("FK").

This small section isn't necessary to complete the mission, but if you're a strong character with multiple allies you can gain some good combat experience and valuable loot.

EAG president Tom Zuchowski writing in the June 1995 issue of the club newsletter gave Caves of Treasure Island a mixed review, praising its many nice touches and special effects but also saying he disliked the many death traps and the need for guesswork and trial-and-error to complete the mission. Zuchowski gave the adventure an overall rating of 5/10, with a 6/10 for difficulty.

The location of Treasure Island relative to the Main Hall is unknown, though the fact that Genzenbraun's message in a bottle came successfully back to the Guild may suggest it's not terribly remote. Though unnamed, the island in the later adventure Furioso by William Davis may be Treasure Island.