In the review of Beginner's Cave II (written by "Starshine") in June 1990 issue of the Eamon Adventurer's Guild Newsletter, the reviewer criticized the adventure for including a bug in which the Power spell causes an "OUT OF DATA" error. Following the review, Tom Zuchowski appended an editor's note, stating that the Power bug was due to mistakes in his own conversion of the adventure from Nelson's Eamon II (and not, therefore, Nelson's fault).

Zuchowski notes in the adventure's introduction that Nelson had created it as "a beginner's cave... for the aborted Eamon II project", and that he translated Nelson's adventure to standard Eamon version 6 format (just as Amateur Alley was backported from Nelson's Knight Quest). This places Beginner's Cave II in a small class of Eamon adventures that were ported from competing platforms; others include The Quest for the Fire Dragon and the more recent Land of the Mountain King.

The Beginner's Cave has been set up by the Warlord as a service to all Free Adventurers, giving them a chance to try their skills in a not-too-dangerous setting.

Let us all toast the Warlord for restocking the cave daily! 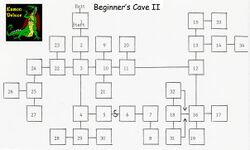