Castle of Doom is an Eamon adventure written by Donald Brown.

Castle of Doom is the third adventure written by Donald Brown for Eamon. While Doom retains the slightly absurdist and irreverent mood of The Beginners Cave and The Lair of the Minotaur, employing, e.g., three dwarves named "Huey," "Dewey," and "Louie", Brown also increases the complexity of the programming. Doom has a "snapshot" feature that the disk records the state of the dungeon upon a player's exit so that he or she may return to the Main Hall without interrupting the adventure.

Castle of Doom lacks a detailed plot; the premise of the adventure is that "two kindly old ladies" maintain the circular Castle of Doom as a challenge to members of the Guild of Free Adventurers. The player is expected to explore and plunder the titular castle. The tongue-in-cheek suggestion of some inherent artificiality in the world of Eamon is in character for Donald Brown's adventures, cf. The Beginners Cave, in which a character called the Warlord is tasked with keeping the cave stocked with treasure, rats, and pirates.

As Tom Zuchowski notes in his review, the "kindly old ladies" provide a rationale for the "snapshot" feature programmed by Brown. This is billed as the old ladies' willingness to preserve the castle intact as a service to adventurers while they "heal up" in the Main Hall.

The castle is a multilevel circular structure, encircled outside by a wall. You enter the grounds through a single small break in the wall and begin the adventure at the castle's main door. 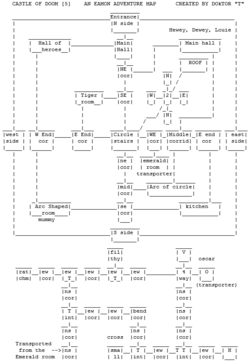 Thanks to the snapshot feature, your adventurer can return to the castle again later and you'll find things just as you left them. If you discovered more loot than you could haul away in a single trip, you can return for the rest.