Peg's Place is an Eamon adventure written by Margaret Anderson and Anne Anderson, probably in 1986. The adventure is distinctive for replacing the standard physical combat system with verbal scoldings, for its randomization of various game elements, and for the fact that it can be played either with or without starting at the Main Hall.

The file STARTER.BAS on the adventure disk gives the following dedication:

Peg Steinmetz taught first grade at Greenwood Elementary School and later served as its principal for 15 years. The adventure takes place in and around Greenwood, carefully remaking the various hallways and classrooms that would have been familiar to Steinmetz and Anderson, and populating them with some of the real-world people who frequented them, along with a variety of lurking spies and other villains.

John Nelson announced Peg's Place in the January 1987 edition of the Eamon Adventurer's Log, saying that it was one of a large group of new adventures that the club had received over the preceding months. The last official update to the original DOS version of the game was 30 November 1990.

As the story begins, the adventurer is being magically transported through space and time to the distant world of Earth, and upon arrival finds a piece of paper that explains the mission:

In a remote world, once upon a time, a group of teachers, inspired (if that's the right word) by a Wednesday afternoon inservice, all signed a document (legally binding) vowing chastity, poverty, and obedience. This document was entrusted to W. Craig Staff, one of the teachers. On sober reflection he decided to put the document in a "safe place". Somewhat later, Staff left to take a position teaching at UWRF. Because of his heavy teaching load, the other teachers have not been able to contact him.

Shortly after the document was hidden, a political group called S.I.T! (Society to Intimidate Teachers) got control of the school board. Now the S.I.T! has learned about the document and S.I.T! spies are searching the school for it.

You have been summoned here by a spell that several teachers pooled their life savings to buy. You have two hours before the spell wears off. If you find the missing document and take it to the teachers' lounge, you will be rewarded.

Adventurers should realize that in this world violence is frowned upon. Therefore, your only weapon is an unabridged dictionary and all battles are verbal. You need to remember to "scold" or "lecture" your opponents. Also, remember, the teachers hired you. Scolding a teacher will get you into serious trouble and probably make it impossible for you to succeed in your mission.

You have a time limit. You need to find the documents within two hours, by 5 o'clock. At that time the spell will wear off and you will be sent back to where you came from.

In short: you must search the school for the hidden document and take it to the lounge.

Peg's Place features a number of random elements that make the adventure a little bit different each time it's played, and one of these variables is the starting location. There are four exterior doors that lead into the school and you begin the adventure outside at one of these entrances. Wherever you start, enter and begin hunting for the necessary artifacts listed in the next section.

The school is laid out as two long intersecting corridors roughly in the shape of a "T", one running east/west, the other running north/south. Each corridor is lined with classrooms or other school rooms, most of which have only a single exit back to the hallway. As you explore, you can use the TIME command to keep an eye on the clock.

The only death traps to watch out for are the bathrooms. You can safely enter the lavatory that corresponds to your sex, but if you enter the other (e.g., if you're a girl and try to enter the boy's room), you will "die of embarrassment" and the adventure will end.

Scattered randomly throughout the school are several items you need to complete the mission: 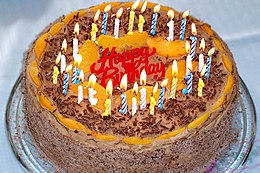 "A large birthday cake, loaded with lighted candles, is in the middle of the room..."

A pail of garbage is also needed and can be found in the kitchen, but it doesn't need to be in your inventory. Some other items unneeded for the mission are in fixed locations:

The adventure's monsters are scattered throughout the school, some randomly and others in fixed locations. Some people are friendly and will join you; some are busy and won't leave their work, or will ignore you; others are hostile and will engage you in verbal battle.

Since violent combat is forbidden, conflict is resolved by using SCOLD or LECTURE to score rhetorical points on opponents. Enemies you succeed in striking may get embarrassed, turn red, or become almost incoherent, and when they lose the argument will completely vanish. (Vanquished opponents leave no bodies behind, but any artifacts they were carrying will appear.)

The most common enemies are S.I.T! spies, who may suddenly appear in random locations to spar with you. Other foes are the District Enforcer, the Chapter One Inspector, the DPI Hit Man, and the Russian Agent. The Fire Inspector and the UPS Delivery Man may ignore you, or may even join you on your quest. If the UPS Delivery Man is vanquished, he'll drop the large package he's carrying and out of it will step the lovely and scantily-clad Fifi la Femme.

Characters who may be friendly (or at least unlikely to attack) are Dick, Trygve, Bobbi, Lorraine, Mary, Robin, Cathy, Peggy, Romelle, Bert, Pat, Theresa, Debbie, Roger, Nancy, Simone, Barb, Gin, Steve, Paul, Jan, Andy, the Reading Coordinator, office secretary Marge, the Principal, the Nurse, and the Troll. You may also meet a friendly dog whom you can PET. 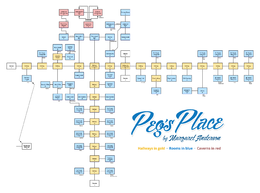 A map of the school by Huw Williams.

The magic spell that sent you to the school finally wears off and you find yourself transported back to the meadow east of the Main Hall, where you may recover all the weapons you left behind. Pick them up and then enter the hall to end the mission. The pawnbroker Sam Slicker will pay you for your haul, including 5,000 gold pieces for the teachers' gratitude.

Tom Zuchowski reviewed Peg's Place in the June 1988 edition of the Eamon Adventurer's Guild Newsletter and gave it a score of 8 out of 10, saying he "had a great time." Zuchowski noted that the adventure wouldn't necessarily suit younger players or the hack & slash crowd, and felt that exploring all the classrooms wore a little thin, but said that the time limit worked well to raise the tension, and praised Anderson's non-violent alternative to combat. He estimated the playing time at 1.5–2 hours.

Anderson in the adventure's dedication identifies the location as "Greenwood School, River Falls, Wisconsin", which opened in the fall of 1955 and serves about 400 students. New sections were added to Greenwood in the early 1990s, including a new gymnasium at the east end, the old one being converted into a media room. The school was remodeled in 2013 at which point the main office was moved from where it's depicted in the adventure.