The Black Death is an Eamon adventure written by John Nelson.

You have watched your friends get sick and shake with the fever. Some of them dying while you were helpless to help.

A doctor trying to help is now dying. He tells you that there is nothing you can do, but you feel that you must try. You journey to the royal palace to seek the aid of the royal wizard, or the King. Anybody would do at this point.

The King summons you to his chamber. He has received a ransom note of sorts.

The note is from an infamous mad doctor.

The doctor has found a cure for the plague that now enshrouds the land. The cure of course will be expensive

The doctor wants one billion gold pieces for the cure. If he does not get it, he will allow the entire kingdom to die.

The King says there is no way he can raise that much gold. The kingdom has less than half a million. The King is willing to pay a fair price for the serum, but could never pay that much!

You decide you must seek the serum, in spite of the fact that you have heard that the mad doctor's castle is very well defended.

You sneak up to the mad doctor's castle in the darkness. 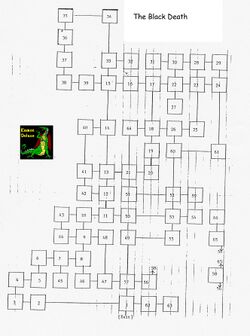