Escape from the Orc Lair

Escape from the Orc Lair is an Eamon adventure written by Jay Hinkelman.

Boy do you feel good as you go looking for new adventure! Striding down a nearby dark alley, you feel so energetic that you almost don't feel it when you are clubbed in the head by a group of orcs.

You wake up some time later, and, groggy as you are, you hear part of one of their conversations.

Voice #1: "It won't be long before we have enough captives!"

Voice #2: "I just hope we make enough ransom money, or I will have your head, Grishnakh!"

Unfortunately, you lapse into unconsciousness again, but you realize without much difficulty that is is your duty to escape and warn the guild, before it meets certain ruin! 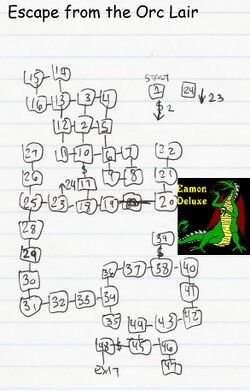 This brief walkthrough was written by Jared Davis in 2005:

This Eamon is actually very simple, and has many secret passages discovered by LOOK, but as soon as you find them, you go through them immediately!