Land of the Mountain King

Land of the Mountain King is an Eamon adventure written by Kenneth Pedersen for use with the Eamon CS system and published in February 2020. At just 18 rooms and eight monsters it's among the shortest adventures.

Author Kenneth Pedersen first built Land of the Mountain King in the ADRIFT authoring system and in 2017 entered it into the annual Interactive Fiction Competition (IFComp); he later converted it to Eamon CS, officially completing it in February 2020. In the original version of the game, the adventurer is a Viking named Kral, but in the CS version the adventurer is whoever the player brought into the game from the Main Hall.

The game offers the following introduction:

You are walking in the woods looking for prey when you are suddenly shrouded in a cloud of white smoke. The smoke is too dense to see through, but eventually, the smoke clears and you find yourself on a barren plain.

As you turn around, you see an old witch stand before you. "Listen carefully!" the witch whispers with a hoarse voice.

"I have summoned you here to help me clear this land from the evil mountain king, who lives in his castle up north. The mountain king terrorizes this land and must die so that peace can be restored around here. If you succeed you will be significantly rewarded.

"You will meet various of his evil guardians on your quest, so take care. Unfortunately, I could not bring you here with your weapons, so you will have to make do with what you find around here.

"You may also find that your abilities have changed. But don't worry - once you return to Eamon everything will be as it used to.

With those words, the witch disappears in a puff of white smoke. 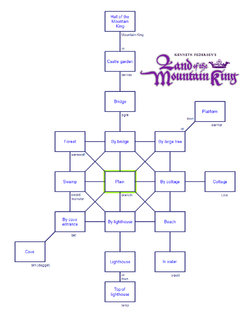 A map of the area.

You begin your mission alone on an open plain with no weapons or armor just as the witch said, so gathering new gear is the top priority. Scattered around the area are all the pieces you need to succeed, but it's important to gather them in the right order, starting with the easiest opponents and working upward. Some enemies are quite strong and encountering them before you've sufficiently armed and armored yourself is likely to lead to a quick defeat! Even following the optimal path you may die multiple times, so be sure the save your progress each time you successfully complete a step. Fortunately your health returns to full after the successful conclusion of each encounter.

From the plain you're free to move in all eight directions: north (to a bridge), northeast (to a tree), east (to a cottage), southeast (to a beach), south (to a lighthouse), southwest (to a cave), west (to a swamp), and northwest (to a forest).

At last you're buffed, armed, armored, and ready to take on the mission the witch gave you.

After you defeat the king the witch will appear and thank you for freeing the land from the tyrant. As a reward, she makes you the new king and you enjoy a long and benevolent reign. Upon your deathbed the witch appears in a vision, telling you that she'll return you to your former life on Eamon, along with a diamond as a token of gratitude.

Since the adventurer is magically transported to and from the Mountain King's domain, its physical location is unknown. The witch's comment about things returning to normal "once you return to Eamon" suggests that the adventure takes place in another world.