The Bridge of Catzad-Dum is an Eamon adventure written by Nathan Segerlind and released in September 1988, adapted from a story of the same name by Mark E. Rogers in his book The Adventures of Samurai Cat (1984). The story parodies the dwarven kingdom of Moria from J.R.R. Tolkien's The Fellowship of the Ring, with the dwarves and orcs replaced by cats and "porks" (pigs).

Samurai Cat began as a series of paintings and illustrations made in the 1970s by American artist Mark E. Rogers (19 April 1952–2 February 2014) meant to spoof martial arts films and fantasy stories. Rogers decided in the early 1980s to write some short stories to fit his paintings, and in 1984 published the first five as The Adventures of Samurai Cat, a collection that included "The Bridge of Catzad-Dum", an anachronistic satire of a portion of J. R. R. Tolkien's fantasy novel The Fellowship of the Ring.

Segerlind's adaptation is very true to Rogers' original story, faithfully reproducing the quest, monsters, weapons, order of encounters, and even the solutions to defeat the final enemies. Tom Zuchowski announced the adventure in the September 1988 issue of the Eamon Adventurer's Guild Newsletter. Segerlind later adapted a second Samurai Cat story, "Against the Gods", and released it as Ragnarok Revisited in July 1989.

In this adventure you (implicitly) play as Samurai Cat, the hero of the adventures by Mark Rogers upon which Segerlind's story is based, and have at your disposal Samurai Cat's signature combat moves: the Deflecting Blow which can deflect incoming projectiles; the Scarlet Tapeworm which can disarm an opponent; and the Whirling Outboard Motor Propeller Blow which doubles your damage while halving your chance to hit.

You begin on a rocky crag overlooking the west door of Catzad-Dum, with your previous weapons now supplemented by a 2d8 katana (long sword) and a 1d8 wakazashi (short sword). 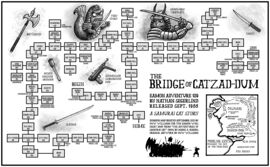 If you're carrying more than four weapons when you leave, Sharkey, the local sheriff, will "threaten to smack you upside the head with a Buick" if you don't sell the extras.

As you're about to leave you again meet the other party of adventurers that you briefly encountered before, and notice that their wizard is missing. "He fell into shadow," explains the Elf; one of the others interjects, "It was his own damn fault. We should have took a right at the Burger King..." You bid them farewell and sail for the Main Hall "via the Bay of Belfalas, the Gulf of Lune, and the Panama Canal."

Finally, the game promises that if you're looking for a big reward, "check out your stats!"

Pat Hurst gave the adventure a generally favorable review in the December 1988 issue of the EAG Newsletter, calling it "absolute lunacy" and fun to play. Though he noted some minor errors in language and programming, Hurst praised the adventure's humor, length, and detail, and recommended it for hack'n'slash players.

The EAG lists the adventure's average rating as 6.5 based on two reviews.

According to a map by Samurai Cat author Mark Rogers, Catzad-Dum lies in the Play Misty For Me Mountains of Middling Earth, just west of the River Howyaduin.