Tomb of the Vampire

Tomb of the Vampire is an Eamon adventure written by Matthew Grayson and William Trent.

In correspondence with Huw Williams in March 2020, Grayson recalls that he first played Eamon one summer as a child while he and his brother were staying with their grandfather William Trent, and since he was into Dungeons & Dragons at the time really enjoyed the experience of playing an RPG on the computer. After playing the Eamon adventures, Grayson found the program for creating custom adventures and set to work building his own dungeon:

"One evening when my grandfather, Dr. Trent, came home from work I stated, 'Did you know you could make your own adventures?' He stated, 'Yes, but that is too hard.' He was shocked when I showed him that I had already created The Tomb of the Vampire."

Grayson says his adventure was originally quite short and consisted of only about 10 to 15 rooms, but Trent was inspired by Grayson's work and sometime later called his grandson to tell him he'd expanded the adventure and submitted it the NEUC for others to play. Grayson states that he based some of the pieces of the story off of his memories of playing D&D with his friends, including items he remembered like the Holy Avenger Sword, Ogre Magi, Elf Warriors, etc. "I remember reading a review that did not understand why an Ogre Magi was in a dungeon. I don't either now, but I was a kid then so it made sense at the time."

Tomb of the Vampire was submitted for distribution probably around the time the NEUC was winding down and the EAG beginning. It was one of six new titles announced in the premier issue of the Eamon Adventurer's Guild Newsletter in June 1988.

You are sent by the Guild to the town of Brasov in the Transylvanian Mountains where the citizens are being terrorized and preyed upon by what they believe to be vampire. The creature is rumored to dwell in a nearby mountain cave, a place the citizens call the "Tomb of the Vampire".

Brasov's mayor commissions you to seek out and destroy the vampire and any other threatening creatures you find in the cave, and as a reward grants you permission to keep any treasure you find.

Trent notes that Tomb of the Vampire is a very difficult cave and should not be attempted by beginners or by adventurers who don't know all the magic spells; Power, however, is the only one that's truly vital. Playing as Sam or some similarly capable character is wise since the enemies you'll face in the tomb tend to be quite hardy. Secret passages abound so be sure to regularly check rooms for hidden exits.

The story begins at the entrance to the vampire's lair, an ancient cave in the mountain beyond the town's graveyard: 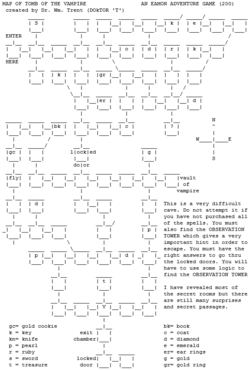 The inner circle, western half 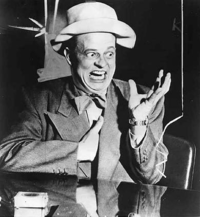 The inner circle, eastern half

The vampire and escape

The townspeople are overjoyed at your success and give you a hero's welcome.

Tomb of the Vampire is unusual in having been reviewed twice by the same critic.

Author Robert Parker writing in the December 1990 issue of the Eamon Adventurer's Guild Newsletter initially gave the adventure a low rating of 4 out of 10, criticizing it for the tedium of having to search every room for hidden passages, the brief or incomplete room descriptions, the fact that some of the monsters didn't seem to fit the setting, and its general lack of sophistication. Newsletter editor Tom Zuchowski added a counterpoint, noting that the adventure was comparable to many other Eamons and suggesting that Parker's review was a little too severe.

Parker later re-evaluated the adventure more favorably and apologized to Dr. Trent for his initial poor review. He wrote that after playing an updated copy with bug fixes applied the adventure was more to his liking and upped his rating to a 6. Parker praised the well thought-out map and the interesting puzzle clues.

The city of Brașov is located in central Romania in the historical region of Transylvania. The vampire's tomb, described as being in the mountain near town, would presumably lie beneath Tâmpa, a massive limestone peak that rises over a thousand feet above the community. Tâmpa was the site of a citadel built in the early 1200s and destroyed in the 15th century.