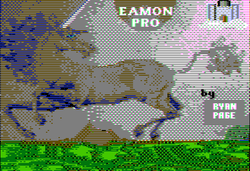 The game's splash screen, graced by a galloping unicorn.

Eamon Pro is an enhanced version of Eamon written for the Apple II computer by Ryan Page in approximately 1989.

Eamon Pro was partially compatible with the standard Eamon corpus, ostensibly allowing players to load a standard adventure from — and subsequently return to — the master disk. The system maintained a number of upgrades similar to those of Imagery! (e.g., an adventurer's maintaining of experience points and "levels") and Eamon II (e.g., the ability to carry more than four weapons and a variety of new spells).

A single adventure was written by Ryan Page for Eamon Pro entitled The Adventurer's General Store. Although housed on its own disk, The Adventurer's General Store serves functions analogous to both The Beginners Cave and the village introduced by Rick Volberding inasmuch as beginner-level adventurers can find a simple, introductory quest and higher-level characters can purchase a range of unique and powerful weapons.

In the December 1989 issue of the Eamon Adventurer's Guild Newsletter, Tom Zuchowski mentions Page's system, describing it as a "supercharged, multi-disk version of the Expanded Master." Zuchowski's discussion of the system, however, was forestalled by his having to continually debug Eamon Pro to work smoothly on his computer. Page employed a proprietary DOS—SPEEDOS—on the disks, entailing that to run the master disk requires first booting an additional disk before proceeding to the master.

The Eamon Pro master disk has routines to import standard Eamon characters and to allow characters to embark on standard adventures from Eamon Pro.

Differences Between Eamon and Eamon Pro

Most of the distinct gameplay qualities of Eamon Pro rely heavily on the concept of "leveling." Through solving puzzles, defeating adversaries, or completing adventures, players in principle are able to earn experience points. (In practice, slaying monsters in The Adventurer's General Store is the only way to accrue such points as it was the only Pro adventure; to do anything meaningful, a player would have to run through the module numerous times. While a player in theory is able to play a standard Eamon module, no routine is in place to award experience points in such settings.) Experience points ultimately win the player higher levels for his or her character. The salient benefits are restricted to two functions: the potential for learning additional spells and becoming a "magical creature."

In the first case, once a player reaches Level Two, he or she is able to learn four new spells from Hokas Tokas. Each of the traditional Eamon spells has a "Level Two" counterpart — Blast yields "Energy Beam," Heal becomes "Cure," Speed yields "Fear," and Power's additional level is "Leave". "Energy Beam" and "Cure" are essentially higher-power versions of their counterparts, doing more damage and healing more health, respectively. Employing "Fear" gives a chance to cause enemy monsters to flee the room during combat, and employing "Leave" causes the player to randomly teleport to a different location on the map.

Minor changes primarily involved equipment. Marcos Cavielli now carries a wider array of weaponry (one new weapon type is "magical ring") and additional armor types ("Mithril" armor and three sizes of shield), and weapons carry a data flag signalling the type of weapon, that is, whether the weapon is magical, futuristic, enchanted, etc. The player is also permitted to maintain nine weapons simultaneously, though when embarking on a standard Eamon adventure, only four may be brought along to preserve compatibility.