Fiends of Eamon is an Eamon adventure written by Frank Black.

The notes in the introduction indicate that Fiends of Eamon was written over the course of one week with little special programming to test out the nascent Eamon 8.0 system—the author's notes in fact refer to the MAIN PGM as a "prototype"—being worked on by Frank Black (né Kunze). The adventure (as the title suggests) features return appearances from many of the antagonists of adventures from both the NEUC and EAG eras of Eamon.

While Fiends of Eamon is broken up into three distinct acts, as a whole the adventure serves as a sequel to Donald Brown's Assault on the Clone Master. The conceit of the adventure is that during the events of Assault, in which the player was transported to an alternate universe to defeat the Clone Master, the antagonist—knowing that his defeat was imminent at the hands of the player—cloned himself at the eleventh hour so that the clone could take the fall in his place. Hence, while the player believed that he or she had successfully vanquished the Clone Master, only the decoy was slain. Upon the adventurer's return to Eamon at the conclusion of Assault, the Clone Master followed through the portal to rebuild his Clonatorium and exact revenge on the player, aided by Doctor Benway from Black's Adventure in Interzone (as well as from William Burrough's Naked Lunch) and a host of classic Eamon villains. 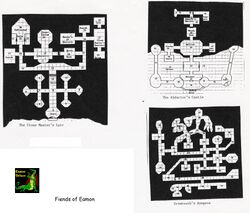 Tom Zuchowski's review was positive—awarding it a rating of 8 of 10—noting that, despite the primary emphasis being on combat rather than puzzles, the execution and humor of the adventure made up for this.

The three acts feature distinct maps, the adventurer being transported from one location to another by one of the Clone Master's devices after the conclusion of each segment. The first is set within the Clone Master's fortified laboratory, described as being on an island several days' travel from the Main Hall. The second act takes place in the castle of the Abductor of Jim Jacobson's The Abductor's Quarters. The lair of the Abductor was described as lying east of the Main Hall in Jacobson's adventure; these may be same location. The final act is set in a subterranean cavern system and no indication of its geographical location is given.

Besides acting as a sequel to Assault on the Clone Master, Fiends of Eamon features a number of appearances from other Eamon adventures:

There are presumably many other, more subtle references to further Eamon adventures as well.