The Wizard of the Spheres

The Wizard of the Spheres is an Eamon adventure written by Marc Elkin and released in January 1987, notable for its unique speech sound effects.

From the adventure's introduction:

Something is wrong with Hokas. You watch him as he walks across the Main Hall toward you with his eyes looking at the floor.

Hokas starts to speak: "My brother Pokas has been captured by the Wizard of the Spheres and none of the adventurers here are willing to risk saving him. Will you help?"

After thinking about the possible reward you say yes.

"Good," says Hokas as he begins to smile. "The Wizard of the Spheres is very powerful and has never been defeated. All the spells I have taught you will be useless against him."

You wonder what you may have gotten yourself into. Hokas continues, "The wizard's power is contained in the many spheres which are stored in his lair. Destroy the correct ones and he will be helpless ."

Hokas says some magic words and you are transported to the lair of the Wizard of the Spheres... 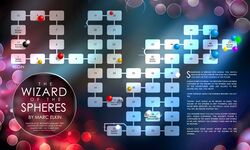 The wizard's underground lair is easy to traverse and consists of 51 rooms with no hidden exits and just one locked door. Other than the wizard himself it's populated only by a variety of spheres, both living and inanimate; the most common are red, white, and blue spheres which act as guards, and gold spheres which are treasure. Avoid picking up the remains of defeated spheres: some will cause you to drop all of your possessions. 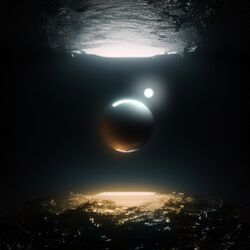 Elkin created eleven speech files that play at key points in the adventure: