Buccaneer! is a two-disk Eamon adventure written by Pat Hurst and released in October 1987. The adventure is distinctive for its many unique features, including the ability to hire and stock a ship, recruit a crew, and sail freely across the open sea, and is one of the most highly rated adventures in the Eamon catalog.

John Nelson announced Buccaneer!'s release in the October 1987 issue of the Eamon Adventurer's Log along with Hurst's Dark Brotherhood and three others by Dan Cross, Tom Zuchowski, and Sam Ruby. Nelson observed that Hurst's two-disk adventures were "crammed full" of content and "surely rank among the finest Eamons ever written." Hurst also authored the issue's "Designer's Den" column in which he describes how he programmed monster reactions in Buccaneer!.

Also in October Hurst released his Eamon Gazetteer which lists some of the important people, places, and artifacts that feature in his adventures.

The infamous pirate Henri le Marque has finally been captured and is due to be executed shortly in the jailyard in Evenhold's harbor district. It's rumored that he hid a great quantity of treasure somewhere before his capture and you hope he might share the location before he dies. You hurry across town to the harbor district entrance at Weyren's Gate.

Hurst's introduction also include the following notes and instructions:

EXAMINE, GIVE, READ, and PUT have been deleted from the 6.0 command list. GET, TAKE, and ATTACK have been altered to reflect conditions in a populous area. Added commands include SEARCH, STATUS, GAMBLE, PAY, SELL, and VOYAGE. Voyage is used to move to part two of the quest. Part one of the quest is in 6-direction format (N/S/E/W/U/D).

This adventure can require a lot of cash up front. If you don't have much, you may want to return to the Main Hall. Since this is a long adventure with many ways to go astray, the "Fresh Meat" file is saved on both disk sides. Once you have begun a side, it can be restarted by running "MAIN PGM". 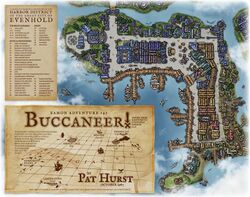 Map of the harbor district and Malphigian Sea by Huw Williams

Adventure author and reviewer Adam Myrow wrote a walkthrough for Buccaneer! that he submitted to the EAG and which Tom Zuchowski published in the December 1997 issue of the club newsletter. Myrow's walkthrough takes the player through all the steps necessary to fulfill the central quest, but does not cover all the adventure's optional features (which Zuchowski notes are enjoyable and worthwhile to experience).

Part one of Buccaneer! takes place entirely in the harbor district of Evenhold, beginning at Weyren's Gate in the northwest corner. Hurst notes that this is maintained as the only entrance to the district in order to keep its rough and unruly denizens separated from the rest of the city. Part two takes place on the Malphigian Sea which extends south and west from the harbor of Evenhold, and includes (in order of proximity) the islands of Esparea Cay, Burning Rock, Melosia, Serpent Isle, Leanda Atoll, and Cormorant Island.