Bookworm 3-D is an Eamon adventure written by Robert Parker. Its Dos 3.3 version for the Apple II is unfinished while its Eamon Deluxe version may be played to its completion.

Bookworm 3-D—the "3-D" is a play on films such as Jaws 3-D—is the conclusion to Parker's "Bookworm trilogy," beginning with Encounter: The Bookworm and Revenge of the Bookworm. In the introductory notes, both Tom Zuchowski and Parker remark that the adventure had substantial contributions from Nathan Segerlind—who makes a cameo appearance along with Sam Ruby; Segerlind is credited with influencing Parker to rewrite the ending of Revenge and the plot of 3-D. The adventure itself was left unfinished due to Parker's loss of his Apple II.

As Zuchowski remarks in the introduction, the adventure is divided into two acts; the first act was "so good" that Zuchowski felt obliged to debug the disk and release it, despite the unfinished second act, adding a routine to return the player to the Main Hall in the uncompletable second act by typing "I QUIT." In the Eamon Deluxe update, Frank Black made use of the undeployed effects from Parker's Apple II database to reconstruct additional routines and restore Parker's original, inaccessible ending, enabling adventurers to complete Bookworm 3-D.

The Bookworm, introduced in Encounter: The Bookworm, is a criminal responsible for decimating libraries across Eamon, including the Eamon Public Library. Encounter and Revenge each center around the adventurer seeking to capture the Bookworm at the behest of Hokas Tokas. 3-D is a direct sequel to Revenge, picking up precisely where Revenge concludes. After defeating and slaying the Bookworm, the ending of Revenge relates that the adventurer is charged with returning to Des Moines, Iowa to retrieve the corpse of the Bookworm, only to discover a monographed neckerchief in place of the Bookworm's body and concludes with the Bookworm still at large.

Bookworm 3-D begins with rumors of odd occurrences at The Beginners Cave and suspicions that it may be the fugitive Bookworm behind them. With the task of investigating and capturing the Bookworm, the adventurer thus enters the cave in pursuit. 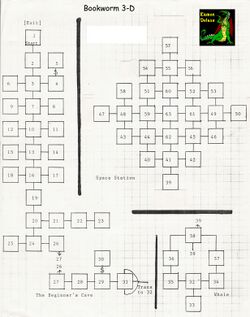 Despite being unfinished, Tom Zuchowski still awarded Bookworm 3-D a rating of 7.5 of 10. He noted that the difficulty level was extremely low, 3-D being played "for laughs", but cautioned the reader that the humor could be risqué at certain points.