As with The Beginners Cave, this is said to be a training area setup by the Warlord and overseen by William Misslefire where new members of the Guild of Free Adventurers may hone their skills and gather some small treasures. As with other beginner areas (except in Eamon Deluxe), characters who are too experienced will be barred from entering by the Knight Marshal. 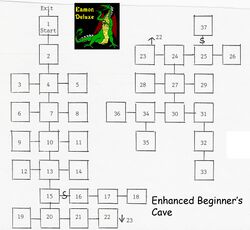 As with most of the Beginners Adventures, Frank Black has not changed any of the content, but he has inserted additional object descriptions for some items that did not possess them earlier, particularly for dead bodies. One of these, that of the cat idol found in the Mummy's tomb, is notable for its display of exasperation on Black's part:
There is a very valuable cat idol here. What is a cat idol? Is it an idol carved to look like a cat or something that cats would idolize? Ask John Nelson, he is the one who decided to randomly place this weird item here.

Tom Zuchowski awarded the game a score of 5, though he did note this was only in consideration of its status of a beginner adventure and advised more experienced Eamon players to avoid it. He also considered not giving the Enhanced Beginners Cave its own official Eamon adventure number classification and simply counting it as part of the original Beginners Cave, but in the end decided there was enough new content (plus a new main program), to warrant it being considered a separate adventure.

Luke Hewitt also awarded the Eamon Deluxe version of the cave a 5, praising its special and light-hearted atmosphere. He noted that except for completionists, it was likely better to ignore the original cave and just play this one since it contains all the same content along with some new.

Since so much is the same as the original Beginners Cave, it is likely that this is not literally a separate cave despite the National Eamon User's Club classification. But it may be the same Beginners Cave at a future time following expansions since no Enhanced Beginners Cave is described in any of the materials we've had detailing the locations of the Guild's training areas, such as Frank Black's short place-holder adventure The Waiting Room. This theory is born out particularly by the fact that one side chamber is described as "the room where the pirates store their treasure". There are also several more friendly characters in the cave, though other than the original Heinrich none are said to be adventurers.

In addition to the pirate background, John Nelson provides a reason for the ruin in the library, a book eating monster known as a Slovobian Book Eater, who may or may not be related to Robert Parker's Bookworm.

Like John Nelson's own earlier Beginners adventure, Beginner's Cave II, this cave features a tomb containing a mummy, though even for the random nature of Eamon why such a thing should be in a training ground for beginner adventurers is unclear. The cave also contains a treasure chest which oddly enough cannot be opened, but still is bought by Sam Slicker at a high price.