This article is about the adventure. For the kingdom itself, see Magic Kingdom.

The Magic Kingdom is an Eamon adventure probably released around 1980 and the only one authored by David Cook. The story is known for its graphical introduction and for being a relatively simple, easy adventure representative of the early Eamon style.

The game opens with the following introduction in graphical Old English lettering:

Recently a local evil sorcerer was spying on you through his crystal ball. He overheard you talking about him and, having a short temper like most evil sorcerers, he instantly sent you to the Magic Kingdom thinking you would never return.

You find yourself at an intersection of trails in the Magic Kingdom State Park and must find a way to return home. 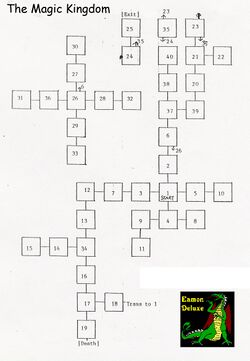 This adventure includes no hidden chambers and has fairly easy monsters, so any adventurer of at least average competence should be able to move through it confidently. Beginning from the four-way intersection: 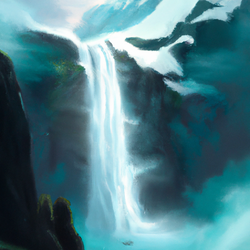 "You see one of the most beautiful sights in the world of Eamon, the Waterfall of the Magic Kingdom... a beautiful 1,000-foot drop that flows out of the ice-capped mountains..." (DALL-E 2)

Eamon Deluxe creator Frank Black calls Magic Kingdom "a relaxing little dungeon", too simple for his tastes but nevertheless enjoyable to play and well suited to young Eamonauts. He found the monsters fun and creative and said it was "worth checking out."

Since the adventurer is magically transported to and from the Magic Kingdom, its location relative to Evenhold is unknown. Most of the kingdom is on a high plateau where the adventure takes place, encompassing ice-capped mountains and the stunning Waterfall of the Magic Kingdom which drops 1,000 feet to the plains below.