The School of Death

The School of Death is an Eamon adventure written by Kurt Townsend.

Outside the Main Hall you encounter Sir Luketzar, the Baron of Lucidia, who tells you that a band of thieves broke into his castle last night. Though the guards captured or killed nearly all the culprits, the leader, Karal, escaped with four of the baron's precious family treasures: the Golden Cup of Negavia; a painting of one of the baron's ancestors; the sword Fireking; and the magical crystal known as Krystar. He tells you that he will pay you well to recover the treasures, and that you can keep Fireking if the other pieces are safely returned.

The baron says that Karal is believed to be hiding in the ancient ruins of a school known as Tech High, located in another plane of existence; he'll send Sir Orabon to accompany you on the mission. The baron's wizard Zorphurck magically teleports you to the entrance of the school where the adventure begins. 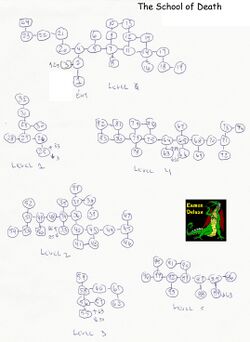 The first room of the adventure identifies the site as "Tech High", or Des Moines Technical High School. Founded in 1942, it moved to its Grand Avenue location in the 1950s and operated as Tech High until 1986 when it became the Central Campus of Des Moines Public Schools.