The Abductor's Quarters is an Eamon adventure written by Jim Jacobson.

The Abductor's Quarters is Jim Jacobson's fourth adventure, following The Devil's Tomb. As with his last adventure, here the setting returns to a more traditional underground dungeon, without the wilderness seen in The Zyphur Riverventure; however, The Abductor's Quarters is the first Eamon to employ a small maze with no visible exits and the need for the player to find ways through via trial and error, similar to those more famously featured in Colossal Cave Adventure and the Zork series.

Your friend Kathryn has been kidnapped by the Abductor, a villainous rogue adventurer who is lord of his own underground dungeon complex. You head in to rescue Kathryn and put an end to the Abductor's plans, but soon after entering the dungeon a rockfall blocks the entrance and you have to search from a means of escape. This means contending with a complex of dark and confusing underground passages, the Abductor's guards, a contentious bandit, and several magic items, including two unique magic swords.

The verbatim introduction text by Jacobson:

You are needed. A friend of yours, Kathryn, is in trouble. After trying to retrieve some of the many valuable treasures in a nearby dungeon, your friend mysteriously disappeared. After careful research, you discover that the dungeon your friend went to is controlled by a mad adventurer known only as "The Abductor". You must find your friend before the Abductor gets nasty and heads start to roll. Good luck!!! 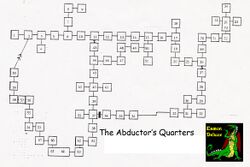 As with the other Deluxe versions of Jim Jacobson's adventures, Frank Black has made significant additions to the play. Some of these take the form of alterations in description, such as the "Guard 1" and "Guard 2"-type enemies in the original being altered to be more amusing. Others involve smoothing over some rough edges, such as the bandit encounter which in the original adventure involves the player's money being unavoidably stolen by a bandit; now one can reclaim it after reaching the Abductor's vault.

Black also replaced five rooms to the program which appeared in the original code but were not used in the game, and added some appropriate treasure items to them, though still (as with the original) most of the treasure is found in the Abductor's vault. The Abductor is also said to have kidnapped several friends from previous Jim Jacobson adventures, too.

Tom Zuchowski gave the adventure a rating of 6 and praised its special effects, though he thought it a hard play especially given the amount of exploration found in the game.

Luke Hewitt was less impressed with the Eamon Deluxe version, giving it only a 4-10, since while he appreciated the specials he disliked the lack of colourful descriptions in the background.

The Abductor's quarters are said to be underground, but like many such locations it's unclear where they actually stand in relation to the Main Hall. However, a bandit who steals the player's money is said to be from Frukendorf, a town ruled by bandits, and later revealed in A Runcible Cargo as the location of the Bandit's Guild west of Evenhold. This combined with the use of a Trollsfire sword by the Abductor may suggest that his base is comparatively close to the Main Hall.