Black Mountain is an Eamon adventure written by John Nelson.

A unique feature of Black Mountain is that instead of a single, set mission, the game randomly assigns one of six possible scenarios. The game's introduction first sets the scene:

You have been summoned to the Kingdom Justice Department. The chief guard at the palace needs some assistance.

Black Bark, the infamous murderer and all-around terrorist is to be tried for his crimes. Black Bark is by far meanest rogue to ever hit these parts.

It then assigns one of the following based on a random number from 1 to 6:

The Royal Guard captured Black Bark and was returning him for trial when they were ambushed by a band of Black Bark's cutthroats. Black Bark killed the guards and rode off to his hideout.

Your mission is to go after Black Bark and return him to the palace for trial. We are offering a 5,000 G.P. reward, and of course if you have to kill him it would be alright, but we would prefer to take him alive. We will only pay 1000 G.P. if you do kill him, however.

Mission 2: Bring back the witness:

Black Bark's latest crime was a hideous murder. There was a witness, however. The witness was taken by the gang as a hostage. They do not know that she saw the whole thing. If they did know, they would kill her in a second. The girl got a message to us that she was being held.

Your mission is to find the witness and bring her back alive.

One of the biggest pieces of evidence we need, we don't have. And that is the murder weapon from the last grisly crime that Black Bark committed. The murder weapon was believed to be a very wicked mace. If we had the mace, we could convict Black Bark much easier.

Your mission is to find the murder weapon and return it to us.

Mission 4: Get the mayor back:

On Black Bark's last excursion, he was almost captured by the local police, but he grabbed the mayor of the village as a hostage. The mayor has been taken to Black Bark's hideout. They haven't seen him since.

Your mission is to find the mayor and return him safely.

We have been building a case against Black Bark for a long time now, but the evidence was stolen from a court safe a couple of days ago. The person who stole the evidence from the court safe is believed to be stooge MacRyan. We hope it was him, in fact, because if it was, he is too stupid to know enough to destroy it.

Your mission is to find the evidence and bring it back intact.

On one of Black Bark's recent missions he obtained some very valuable loot. There are priceles antiques, dangerous weapons, and keepsake mementos belonging to the Queen. The antiques and keepsakes are not replaceable. The weapons would be too dangerous to leave in the hands of a fiend like Bark.

Your mission is to find this loot and return it to the palace.

In each case the chief prosecutor ends by noting, "This is a volunteer mission, so if you do not want to go, we will understand." If you accept, he'll say, "Good. Your kingdom will be proud of you." If you decline, he'll say, "Well, then, we have an alternative for you. There is another thing we need," and will present you with another option. If you continue to decline he'll become annoyed, and if you refuse all the missions he'll have you thrown in prison where you soon die from disease. 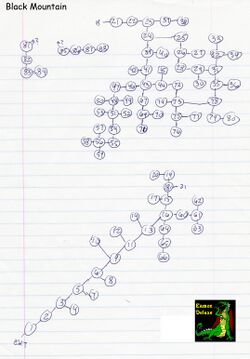