The Ice Cave is an Eamon adventure written by Jon Walker in 1985 for PC.

The Ice Cave is the first original adventure for Jon Walker's MS-DOS Eamon port, written by Walker himself. When PC-SIG took over distribution of Walker's Eamon, The Ice Cave was one of the four disks supported by the company, along with The Beginners Cave, The Quest for Trezore, and Assault on the Clone Master. The actual game appears half-finished, with puzzles and locked doors suggested by room descriptions absent from the game itself.

The adventurer returns to his or her home in the forest in which the adventurer has been living with his or her partner—either "Lovely Lil" or "Gorgeous George," depending the character's sex—to find the house locked and the significant other abducted by the adventure's antagonist, Broomhandle the Witch, described as the player's "old enemy."

A message is scrawled in the dirt reading "Ice Cave." With this clue, the adventurer is expected to head north to the ice caves of Eamon to rescue the abducted love interest. 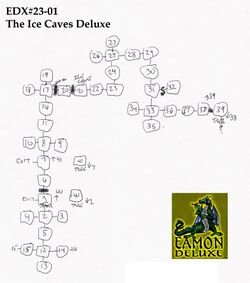 You begin the adventure just south of your cabin in the forest.

In the Eamon Deluxe Newsletter the adventure gets a rating of 3 out of 10 with a difficulty of 1 out of 10. Frank Black's review is largely negative, owing to its simplicity and apparently unfinished nature. The review suggests that despite the fact that the adventure is "worth checking out at least once for the sake of nostalgia," the original version (rather than the Eamon Deluxe revision) deserved an even lower score. 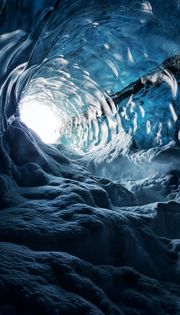 "The walls are full of ice."

The forest in which the adventurer lives lies immediately east of the Main Hall, placing the eponymous Ice Cave to the northeast of the hall. Since The Beginner's Forest is exclusively identified as to the west, one can assume that despite some similarities such as the presence in the woods of elves and other fairy creatures and its close proximity to the Main Hall, that this is either not the same forest or is a very distant region of the forest.