The Pirate's Cave is an Eamon adventure written by Margaret Anderson.

Like Treasure Island, Anderson wrote this adventure for the enjoyment of her eight-year-old nephew and geared the descriptions and puzzles to players of that age. Its release was announced in the March 1992 issue of the Eamon Adventurer's Guild Newsletter.

Dirty Dick is the meanest pirate there ever was. He and his crew have kidnapped Prince Charlie.

Dirty Dick and his crew left their ship at the pirate cave and went to town. You think it is a good time to check the cave and see if you can find Prince Charlie. There are also a lot of treasures in the cave. Good luck.

You begin on a beach on the southern shore of the island, with the loyal dog Toby as your companion. To the west is your way back to the Main Hall by boat; to the north a cave, and to the south a pier where the pirates' ship is docked. 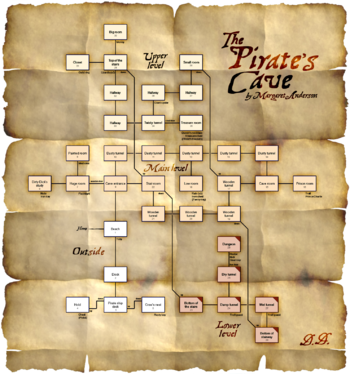 To leave the cave, take the wooden tunnel south, then west, then north to reach the stair room, then exit west to the entrance chamber and return to the beach. Go west to board your board and sail for home with Prince Charlie.