Shift Change at Grimmwax is an Eamon adventure written by husband-and-wife authors David Sparks and Andrea Sparks and was released in March 1990. A second adventure credited only to David (The Ruins of Belfast) was released at the same time.

As you leave the Main Hall, a dark gentleman sidles up to you.

"Arrgh," he says, "there's them hereabouts that would pay plenty to know what goes on at the back building of the Grimmwax Waxworks! I wonder, are you [man/woman] enough to go find out? Of course, getting past the guards will be your first problem. And your last! Har! Har! Har!"

His cold, sardonic laughter lingers in your mind as you close the door on the Main Hall and step out into the mid-afternoon sun.

Shift Change at Grimmwax is more about exploration and puzzles than combat, and the relatively few encounters with enemies never end with death but with the opponent merely being knocked unconscious. Even your adventurer gets knocked out when taking too much damage and revives some time later with full health, having been picked up by the plant guards, stripped of belongings, and returned to the main factory floor. (Certain items you've taken from the plant will be returned to their original positions; others will just disappear.)

Your mission in the plant is vague: just explore the premises, find out whatever you can about what's going on, and return with as much information and loot as possible. The following walkthrough takes you through nearly very room, skipping only a few empty dead-ends, and gives you the opportunity of collecting every artifact, though doing so in some cases may be risky. 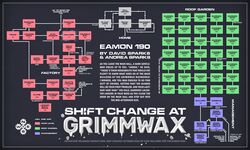 You begin on an east-west road on the prairie, with a path south that returns you to the Main Hall.

You find yourself at the west edge of an expansive rooftop rose garden, its paths laid out in a 5x7 grid. A protective gardener patrols the paths through the flowers: if you encounter him and try to move on, he'll escort you all the way through to the end of the path, but since this makes you miss a couple of important artifacts hidden in the garden it's best to knock out the gardener immediately if you encounter him.

Sam Slicker will pay you for whatever treasures you've found, plus 200 gold if you returned with the truck. The most valuable artifacts and their base values are the model plane (300 gold), the guard's stun gun (500), the dilithium crystals (750), and the blueprints for the aircraft (1000). If you don't bring back the crystals, Sam will encourage you to do so next time.

Jim and Marian Jordan as Fibber McGee and Molly