Batman!! is an Eamon adventure written by Andrew Geha in which the adventurer is cast in the role of the superhero Batman.

The adventure begins with the death of the wizard Mekstel, a friend of the adventurer. According to the introduction, Mekstel possessed a eccentric nature (he is described as an "odd sort of wizard"), leading him to leave the adventurer a "bizarre looking outfit" in his will.

Upon donning the outfit, the adventurer transforms into Batman and is transported to the famous Batmobile in pursuit of Batman's nemesis, the Joker.

Batman!! employs a device first used in The Zyphur Riverventure, in which some rooms' descriptions indicate travel in a raft, to allow the player to navigate Gotham City in the Batmobile. During the action, the adventurer is assisted by a stable of comic allies (Robin, Batgirl, and Commissioner Gordon) to battle a group of comic nemeses (the Joker, the Riddler, Two-Face, and Catwoman) and a cohort of their lackeys.

The implied goal of the adventure is for the adventurer to find his or her way to the Joker's hideout, from which the player may return back to the Main Hall. The plot is meager, although the enemy descriptions imply a narrative involving the use of "Smylex gas" by the Joker and investigation by the player of (e.g.) police files provides limited backstory of several characters. 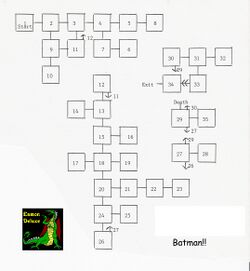 Batman!! was reviewed by Tom Zuchowski in the December 1989 issue of the Eamon Adventurer's Guild Newsletter, who assigned the adventure ratings of 2 for quality and 1 for difficulty. Zuchowski remarked that roughly thirty percent of the adventure's locations were unused and inaccessible. Although describing it as "low in content" and "very unsophisticated," Zuchowski suggested that it would be appropriate for "young Eamonauts," who might enjoy its premise.