Adventure in Interzone is an Eamon adventure written by Frank Black.

Adventure in Interzone is Frank Black's first Eamon adventure, written in 1994 and significantly updated for Eamon Deluxe in 1997. It is an eclectic and comedic adventure, its subject matter crossing from medieval fantasy to science fiction to contemporary settings.

While Interzone draws its influences from a diverse range of sources, such as Michael Moorcock's fantasy novels, the film Pulp Fiction, and The Steve Miller Band, its primary source—whence characters Doctor Benway and A.J. Cohen, the "weapon" Steely Dan, and the setting of Interzone itself are drawn—is beat author William S. Burroughs' novel Naked Lunch. Adventure in Interzone often "breaks the third wall," with notes from the author and references. This is especially notable in the Eamon Deluxe version, in which Frank Black (d.b.a. Frank Kunze) and Tom Zuchowski appear; at one point, the character A.J. vocally laments the unavailability of Eamon adventure disks in Interzone.

A number of characters appearing in Black's other adventures and The Jim Jacobson Adventures Deluxe make their first appearance in Adventure in Interzone.

The backstory for the adventure involves the adventurer's raising the ire of Hokas Tokas, having rifled through the wizard's rooms and drinking his potions while the wizard was off pursuing a dragon. Upon his return, Hokas banishes the player to the Interzone, an "international and inter-dimensional zone" on another planet, surrounded by impassible storms, possibly kept alive by artificial, magical means. Hokas, it is revealed, frequently banishes those with whom he is angry to Interzone, having at one point transported an entire shop from Seattle to the island.

There are a number of segments to the adventure, although the plot of each is reducible to the player trying to escape the current location and return to Eamon in one piece. 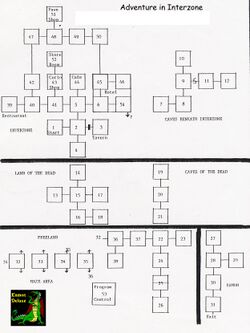 Black offers two walkthroughs for the Eamon Deluxe version, replicated below, a "Civilized" method and "Barbarian" method. The former assumes that the player has at least 2000 gold.

The "Barbarian" means of solving the adventure involves the following:

Tom Zuchowski gave Interzone a score of 8, taking care to mention that the reader would likely rate it more highly. Zuchowski called the adventure "one of the most sophisticated Eamons ever done," noting that the attention paid to the puzzles and plot yielded a "puzzler's delight." Zuchowski also gave the adventure a difficulty rating of 8.

While the "Interzone" of Naked Lunch referred to the international zone of Tangier, the "Interzone" of Eamon is politically robust, with its own Customs Service and military, the "I.Z. Army." It is bounded to the north, south, and west by a polluted ocean so toxic that the player will take damage upon entering it. The main island of Interzone is described as "53 miles long by 68 miles wide" with a number of smaller islands in the archipelago. Either through storms or magic, entering and exiting Interzone is nearly impossible save for extraordinary measures. Due to the virtual inaccessibility—and the lack of extradition treaties—the island is popular for both fugitives and victims of Hokas Tokas' wrath alike.

A further nation-state encountered in the adventure is that of "Freeland," a parody of Washington, D.C. with rejoinders to "pay your taxes" and inhabited by men in uniformly gray suits. It is indirectly suggested that the President of this state is none other than Dave McFenney, the nephew of Shylock McFenney. Although the means of entering Freeland from Interzone during the adventure are rather severe, involving a trek through the "Land of the Dead," characters in the adventure seem to pass between the two states with ease. These two locations are literally on another planet than that of Eamon, as the adventurer escapes to the Eamon by use of a rocket ship housed at Freeland's Hall of Science.

A third location, Albadania, is mentioned only indirectly during the adventure.