The Treachery of Zorag is an Eamon adventure written by Derek Jeter for use with the Eamon Deluxe system, notable for its expansive map, its many custom effects, and its system for handling thirst, hunger, and fatigue. In August 2020 the adventure was ported to Eamon Remastered.

Eamon Deluxe creator Frank Black announced in an April 2013 post to the EAG Blog that he was testing and debugging The Treachery of Zorag and predicted it would be ready for release by May, but development of the system ended around that time and the adventure was never included in an official release.

Jeter later published the adventure himself on his own website, using a Javascript-based version of DOSBox to make it playable through a web browser.

A knight from the nearby city of Behlos arrives at the Main Hall to announce that the king is assembling a party of the land's greatest heroes to investigate the possible return of Zorag, an evil wizard imprisoned for many years and now feared to be free. The knight asks for the Guild's greatest warrior to join the party, and when your comrades all point to you, you accept the errand. The knight orders you to appear at the King's Hall in Behlos at sunrise on the second day to begin the mission. 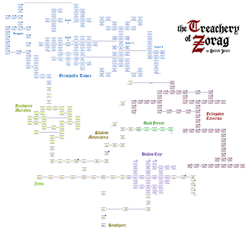 A map of Behlos City, Grimhold's Tower, and other surrounding areas.

The journey from your starting point to Behlos City and parts beyond is long and tiring so keeping supplies on hand is vital; the care package at the very beginning contains some food and water to get you started. When you get fatigued you can make camp for the night, but vicious gnolls or goblins may randomly appear while you sleep to attack you. If you camp with friends, each will take a watch for part of the night.

On the first leg of your journey, be sure to head straight to Behlos City — if you stray too far off course into the countryside, the king's men will pick you up and execute you for failing to follow your orders.

The following walkthrough was written by Derek Jeter in March 2013:

The following hand-drawn maps were created by the author: 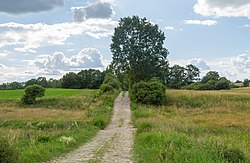 The adventure centers around four main areas — Behlos City, Fellspawn Caverns, Foulwater Marshes, and Grimhold's Tower — all connected by roads and paths running through the expansive wilderness. Play begins at the western end of the King's Road with a path leading south to the Main Hall, suggesting that Behlos City lies to the east/northeast of Evenhold — "miles and miles," according to Jeter's descriptions of the journey.

The sea is beyond it to the east and south, the Shadow Mountains to the northwest, and the Dead Forest to the north. Foulwater Marshes, and Grimhold's Tower beyond it, lies a number of miles both northwest of Behlos and north of the Main Hall.