The King's Testing Ground is a SwordThrust adventure written by Donald Brown in 1981 and is the first in the SwordThrust series.

Like The Beginners Cave in Brown's original Eamon series, The King's Testing Ground is a relatively simple expedition created as a means for beginners to gain some money and experience. The introduction elaborates:

The King, in his royal wisdom, has long recognized the Guild of Rogues to be a great source of power to the kingdom. Thus it is in his interests to keep it as strong as possible. To be sure that only the best enter the guild, he has devised a dungeon for beginning rogues. Although it is not required to survive this test to join the guild, most do go through it.

This dungeon has relatively easy money in it, a good way for a novice to build a stake for him/herself.

You go to the warlock in charge of the dungeon. After you sign a form freeing the kingdom from responsibility for your death or other accident, he waves a hand at you, and your vision blurs. When your eyes focus again, you find yourself in a small chamber, alone!

You begin your adventure in an empty underground chamber at the north end of the Testing Ground, which consists of a set of tunnels, caverns, and underwater passageways on the north edge of a swiftly-flowing river, plus a temple that stands on the riverbank. This walkthrough doesn't provide the quickest path to the end, but instead lets you reach every encounter and every artifact without unnecessary backtracking. 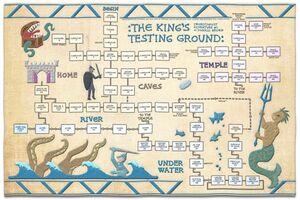 A map of the Testing Ground by Huw Williams, in the style of the Bayeux Tapestry

For a different walkthrough of the adventure, see the SwordThrust Walkthrough by Chester Bolingbroke.