The Lair of Mutants

The Lair of Mutants is an Eamon adventure written by Evan Hodson.

As you scan the list of available quests you are approached by what appears to be a wizard. "You seem to be a brave and doughty warrior," he says. "Could I enlist your help? It is for the most dangerous mission any adventurer has ever embarked upon. Indeed, many have died in the attempt! It is an emergency and help is needed quickly!"

Intrigued, you bid him continue.

"We are in deadly peril from the Mutant Masters," he says. "Slig and his vicious brothers — Jaffar, Trok, Gole, Shaligo and Pyron — supply mutant warriors to the highest bidder. They have set up a complex here on Eamon. They strip the area of all life. Those humans they don't kill outright they use in their fiendish processes." The wizard sights deeply.

"They have just delivered several thousand mutants to a Gorm warlord and are busy mutating thousands more. Normally harmless and common animals become deadly killers. Most are mindlessly obedient soldiers, too. Some cannot be bent to Slig's will and are of course killed."

"Right now," the wizard says, "they will be almost alone in their complex while they mutate more soldiers. If you leave today, you should be able to enter and destroy the place before the soldiers are fully grown. Once that happens, you will never breach their defenses and they will overrun the planet, I fear."

"There is no one here who can help you as yet," he continues. "All of these people here are too inexperienced. Slig would kill them easily, and they would probably get you killed too. A number of veteran warriors have gone into that lair... None have returned. If you don't have a large hardiness and considerable experience, you too will die. I have no desire to send a whelp fresh from the Beginners Cave to his death. I will find someone else. Can you take this quest?"

"Good!" the wizard says. He gives you an amulet and says, "This will bring such aid as I can find here when you first use it. Hopefully some of the Guild's champions will have returned by then. The second time that you use it, it will strengthen you. To invoke its power, say the word 'Hoshianu.'"

The wizard motions to a young lad and says, "Ian here knows the way and will guide you to the lair. Time is short — you must leave now. Do not let Slig or any of his five brother survive your visit. Remember the amulet in your time of need! Good luck!"

It is a journey of several days over confusing terrain. But early one day Ian stops and points. "There," he says simply. And the adventure begins... 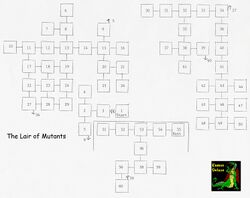