The Maze of Quasequeton is one of two Eamon adventures written by Brian Kondalski, both released in May 1985.

The adventure's mission is simple, as explained in its brief introduction:

You have heard that a group of fighters have gathered in the Maze of Quasequeton. You know that they are lead by a man called the Master. You must find him and kill him. Good luck!!

Having descended a set of stairs into the dungeon, you begin in a room with exits in all four directions. 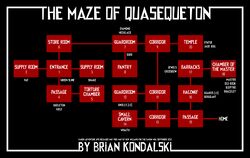 In announcing the adventure's release in the May 1985 newsletter, John Nelson wrote that the adventure was suitable for beginners but would probably be boring for experienced players, given that it's simple and contains little to no special programming.

Tom Zuchowski gave it a rating of 4, calling it "very short and simple but cleanly written" and suggesting it would be a "good choice for young Eamonauts".