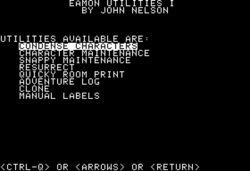 The main menu for Eamon Utilities I.

Eamon Utilities I is the first volume in the Eamon Utilities series, a set of disks containing Eamon utility programs collected (and mostly created) by John Nelson and distributed by the National Eamon User's Club. The disk is dedicated to utilities useful to players rather than necessarily to designers and was built around 1983 to 1984.

Several of the programs were later included in the condensed EAG Utilities Disk assembled by Tom Zuchowski and distributed through the Eamon Adventurer's Guild. Some were also added to the masters distributed by the EAG.

The following are the utilities and related files included on the first volume.