Museum of Unnatural History is an Eamon adventure written by Rick Volberding.

A short, stooped man walks up to your table and introduces himself as Professor Thomias X. Larkspur — a physicist.

"I was working on an interdimensional translocator at the university when my plans were stolen one night a few months ago. This morning I read in the paper that the palace police were baffled by the disappearance of the Eamon Museum of Natural History on 1st Street and Main Hall Avenue.

"My assistant, Yrn Zandro, a Loathian from the Eamon West Archipelago, is also gone. I believe he stole my plans, built a translocator, and warped the museum out of this dimension for evil purposes.

"I have finally finished my machine and located the dimension containing the museum. Unfortunately my translocator will only transport one person to the 'other side.' It is impossible to determine what effect the translocator had on the museum artifacts since other dimensions probably have different basic laws.

"I have talked to the museum board of directors and they said they will pay 5,000 GP for the return of the museum and also a reward for each artifact brought back.

"Um, one more thing. You will be the third adventurer I've translocated today — the others never returned. Do you want to go?"

You quickly go to the university and enter the professor's device. He throws a huge knife switch, and banks of lights and dials come to life. He says, "Here goes!" and presses a button.

You are assaulted by intense flashes of light and a deep thrum! As from a distance you hear the professor: "The main levels of the museum are in the shape of an H! Good luck! ... Well, I'd better find another adventurer now." 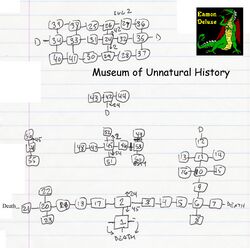 The fictional Eamon Museum of Natural History—the setting for the adventure—is devoted to preserving details about Eamon's history. As such, many facts about planet Eamon may be inferred from its artifacts, monsters, and room descriptions. That Eamon faced eras of evolution is made clear in Unnatural History, with wings devoted to its prehistoric life (primarily dinosaurs). With exhibits on Eamon's Stone Age—as well as a cave man as a monster—it is also suggested that the culture and inhabitants of the planet slowly emerged from a primitive population.

Moreover, the geography of planet Eamon is adumbrated over the course of the adventure. Three continents of planet Eamon are described—that upon which the Main Hall rests, an "hourglass" continent, and a "horseshoe" continent. The flora and fauna of the former are described as primarily "cute and cuddly" while the morphological features of the flora and fauna of the latter two continents are determined by the shape of the landmass. E.g., creatures on the "horseshoe" continent tend to have "U"-shaped horns growing from their heads. Eamon is also described as having both an east and a west archipelago, and an enormous "floating island" hovering two miles above and to the northeast of the Main Hall's continent. Two bodies of water are also described, the North Ocean—populated with giant sea monsters—and the Silver South Seas, from which much of the silver in Eamon is "netted."

Coincidentally, John MacArthur's Journey Across the Muerte Sea also describes Eamon as having three continents, though none in as much geographical detail as found in Unnatural History. The continent in which the Main Hall is found in MacArthur's adventure is called "Grancasa." Voberding's "Main Hall continent" might thus be equated with MacArthur's Grancasa.

The museum normally stands in the town of Evenhold at the corner of First Street and Main Hall Avenue. The site it was translocated to is in the midst of a vast and barren desert somewhere in "another dimension".