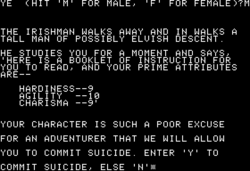 A weak character with 29 attribute points

Suicide is a routine in the New Character program, added in version 1.1 of the standard Eamon Master.

As part of the character creation process, the programs rolls 3d8 for each of the three main attributes of hardiness, agility, and charisma. If the sum of the three attribute values of a new adventurer is less than 39, the Elvish man will say, "Your character is such a poor excuse for an adventurer that we will allow you to commit suicide." If the player opts to do so, the program will discard the values and roll a new set of attributes.