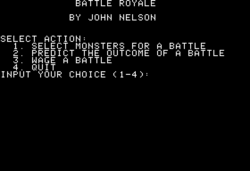 Eamon Utilities III is the third volume in the Eamon Utilities series, a set of disks containing Eamon utility programs created by John Nelson in the early 1980s and distributed by the National Eamon User's Club.

In the documentation, Nelson describes the Eamon Utilities III disk as being for "fun little side games", but that it originated with an idea to create a system for automatically generating Eamon adventures. The idea didn't seem to get farther than building a collection of monsters (stored in the Monster.Master file) that such a system could randomly draw from, and ultimately Nelson just decided that "it would be fun to watch some totally unrelated monsters battle each other." He writes that he left most of the diskette blank to allow for a much larger monster master.

The following are the utilities and related files included on the third volume.