The Life-Orb of Mevtrelek is an Eamon adventure written by Rick Volberding.

You are anticipating a few mugs of ale and a soft bed after returning from a difficult adventure. You sit down at your usual table and then become aware of the strange absence of conversation. Most of the patrons, though seemingly immersed in their cups, are staring at you. The rest are looking at a small, wizened man half-hidden in a dim corner. The dark robe and high collar indicate that the man is a sorceror and the single spiral worked in silver thread is the badge of apprenticeship.

Eyes quickly turn away as the muffled figure approaches you and silently sits down. A hand, dark with age, rises and slowly pushes the cowl back. The wrinkled, bald head contains a pair of cold, black eyes and a near-lipless mouth.

"I am Kulath, apprentice to the magician Mevtrelek A'Haet. He has sent me here to engage the services of an experienced adventurer. I have had little success with those you see here. All say you would be the most appropriate choice."

Though you silently curse the generous recommendations of the others, the name of one of Eamon's most powerful mages excites your curiosity, and, of course, your well-known avarice. You nod at the wizard to continue.

"Recently, strange disturbances in the usual order of things have occured. The most timid of animals attack those who come near. Fields are ravaged at night and dogs howl during the day. Lightning appears in cloudless skies and thunder is heard beneath the ground. Mevtrelek was attempting to determine the cause of this chaos when his life-orb disappeared in a flash of red light. He was able to trace its location before becoming too weak to continue. Now bed-ridden, he is losing strength day-by-day and will surely fail soon unless the orb is returned. My presence is needed here to care for Mevtrelek else I would go. We are prepared to pay the successful adventurer 5000 GP upon his return! There is great danger and little time. Will you go?"

Kulath leads you to his nearby rooms and carefully locks the door. He chants a short incantation and the air becomes hazy.

"Just a de-scrying spell to confuse the sight of any enemies. Now, take this amulet and wear it. Then quickly memorize the spells in this book."

The small, thin book contains but two spells: Stealth and Seek. You have no trouble learning them but there is also no explanation of their effects.

You lay the book down and turn to Kulath to ask him about the spells when he shouts, "Now!", and his room disappears. A moment of disorientation and you reappear in the midst of a dark forest. 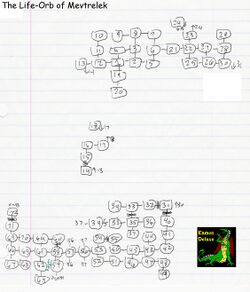