The Deep Canyon is an Eamon adventure written by Kenn Blincoe and released in August 1984, and is the only one Blincoe is known to have made.

Blincoe's adventure was officially announced in August 1984 issue of the NEUC's newsletter when he was 14 years old. Bob Davis reviewed it in the October '84 issue.

From the adventure's introduction:

After three days of traveling you are on the last leg of your journey.

You are walking on a high plateau. There are a few scattered trees and a lot of thick, dry grass. You can see a dense forest far up ahead. Off in the distance you can hear the rumble of rushing water.

You come across a mysterious man in a light-weight robe, to whom you enquire about the deep canyon. The man replies, "I'll show you how to get there, but be forewarned. It'll be up to you to find your way out. It is said that Elzod, the local wizard, keeps some of his pets down there to prevent adventurers from walking off with his valuables. Now follow me..."

You followed him for a while, and watched him grin as he pushed you off a cliff.

Fortunately, someone cast a power spell for you on the way down. The spell slowed your fall, but it was still a painful landing. You now get up to look around and to see how badly you're hurt. 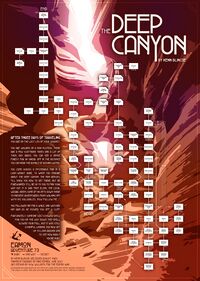 "You notice the many shades of yellow, brown, and orange blending together in the cliffs." (Map by Mike Penner and Huw Williams, 2021)
⚠️ A walkthrough is needed for this adventure.

In his review in the October 1984 newsletter, Bob Davis praised Blincoe's adventure as an excellent choice for young or beginning players, with good descriptions, interesting effects, and a consistent theme. Davis considered the adventure to be easily survivable by most characters, and its small puzzle easily solvable. He noted that the secret exits couldn't be found using the standard LOOK command, but didn't consider it a serious con: "After all, what's a secret passage if it isn't secret?" Davis gave the adventure a rating of 6, with a difficulty of 4.

The Eamon Adventurer's Guild shows the adventure's average rating as 7.0, based on three reviews.

The canyon lies less than a day's journey south of the Main Hall in Evenhold. A very long and mostly straight path leads north from the canyon, gradually rising until it meets the road leading north into town.