Assault on the Clone Master

This article is about the 1980 adventure. For the 2017 remake, see Assault on the Clone Master (Dechant).

Assault on the Clone Master is an Eamon adventure written by series creator Donald Brown probably in 1980. The adventure is notable for being one of the earliest in the series and as one of the first to use wandering monsters.

You were walking away from the Main Hall when you felt that unpleasant wrench in your stomach again. You are in another universe. This time, you have your normal body and weapons. You just need to find your way back.

You came upon a group of people who knew of your plight. They are rebels, and can return you to your world. They will show you the way, if you will only first go with some of their men on a raid in the fortress of the dreaded Clone Master.

When they inform you that they will kill you if you don't go along, you agree.

Before the rebels will return you home, you must do two things — kill the Clone Master and destroy the device that keeps him in power — the Clonatorium!

Three of their men will accompany you.

As the game begins you're standing with a party of rebel bowmen near the Clone Master's mountain fortress. 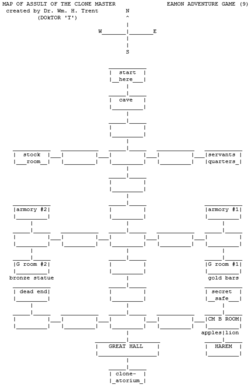 You begin just north of the entrance, in the company of three rebels who will join you on your mission: Natty of Nickleton, Nevil the Gnasher, and Norwood the Nervous. The base is simply arranged and consists of a long, straight central corridor that extends south into the mountain, crossed by three smaller, east/west tunnels. You'll encounter various numbered guards along the way that you'll need to defeat — likely multiple times, thanks to the Clonatorium. You'll also meet some of the Clone Master's servants who tend to be friendlier and more willing to join your party.

Upon your successful return, the rebels throw you a party that lasts three weeks, reward you handsomely, and show you to the space-time flaw that sends you home.

Reviewer Tom Zuchowski gives Assault on the Clone Master a rating of 4/10 (with an average rating by four reviewers of 3.8). He notes the simplicity of the adventure, from its basic map to its easy combat and the absence of puzzles, and describes it as a hack'n'slash scenario "with no mental effort required." However, Zuchowski praises Brown's "wandering monster" feature, in particular the fact that monsters realistically move from room to room rather than simply jumping randomly. He also writes that the cookie-cutter monsters humorously fit the cloning theme. Zuchowski notes that the adventure would be suitable for younger players.

Developer Keith Dechant rewrote Assault on the Clone Master in 2017 and published it as part of his web-based Eamon Remastered game system. The new adventure, also titled Assault on the Clone Master, is based on Brown's original story and shares some features with it, but includes many additions to the map, changes to characters and their descriptions, new effects and puzzles, and an altered premise.