Beginner's Forest is an Eamon adventure for beginners written by Margaret Anderson.

Author Margaret Anderson created her adventures Beginner's Forest and Peg's Place probably in 1985 or early 1986, and submitted them to John Nelson in the latter half of '86. They were two of the twenty-three new adventures that he announced in the January 1987 edition of the Eamon Adventurer's Log.

The Beginner's Forest begins similarly to Donald Brown's original Beginners Cave: you "borrow" a horse to take you to the start of the adventure where you're met by the local Knight Marshal. If he determines that you're a beginner, and sees that you carry at least one weapon, he'll unlock the gate and allow you to proceed. 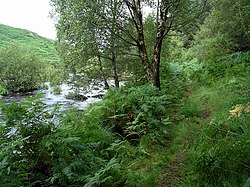 "North of the trail is unpassable undergrowth. A river comes from the west and the path goes west on the riverbank." (Galloway Forest Park)

In the Eamon Deluxe version of the adventure, and the later Eamon Remastered version based on it, the death traps are replaced by less dangerous consequences: attempting to scale the cliffs inflicts only damage rather than immediate death, and attempting to enter the river triggers a magical rescue:

A bright light suddenly breaks through the cold blackness surrounding you. A tall wizard with a long gray beard appears in the light and starts waving a wand in your direction. He informs you that he works for the Eamon Deluxe Commission for the Fair Treatment of Characters and he is attempting to save you from the no-warning death trap that you just stumbled into. Everything starts to spin around you and suddenly you fall onto familiar ground. You are still alive!

Reviewer Tom Zuchowski gave The Beginner's Forest a rating of 5 out of 10, describing it as "well enough written, with a small, coherent map and good descriptions." Zuchowski disliked the difficulty of combat, and noted that he died five or six times in quick succession while trying to get through the map. In particular he warned players to flee the spooks who appear near the beginning of the adventure.

The road back to the Main Hall is described as heading east, so the forest may lie somewhere west of Evenhold.