Blood Feud is an Eamon adventure written by professional game designer Rick Krebs, one of two he authored that were introduced in the May 1985 issue of the Eamon Adventurer's Log.

In correspondence with Huw Williams in 2021, Krebs recalls that a friend of his had talked in the early 1980s with Donald Brown about the possibility of taking over management of the Eamon library and finding ways to build it into a money-making enterprise. The friend asked Krebs to build a couple of adventures as a way of evaluating the system, and Krebs, an avid role-playing gamer and fan of computer games like Wizardy and Ultima, happily obliged. The proposed project never materialized and Krebs later shared the adventures with the newly-formed National Eamon User's Club.

The first adventure Krebs created was the Monty Python-themed Flying Circus and the second was Blood Feud, both of which he completed in 1984. He writes, "Blood Feud was my effort to allow characters to gain levels." A third adventure was planned but never completed.

While sitting at the bar at the local pub, you are approached by a gnome wearing a blue wool hat, glasses and smoking a cigarette.

He says, "Ah, here you are! So you're the brave warrior who has volunteered for this hazardous job? I've been told to fill you in on Blood Feud Castle and the rivalry between the Pozzis and Spanners."

Three (3) hours later he concludes his history of Blood Feud, the Pozzis and the Spanners.

He now gets to his point. "The evil Suedo Guru has stolen the Rod of Stupidity from the royal depository and he has taken up residence at Blood Feud Castle. Should you succeed in recovering the rod you will be given the title of Knight of the Realm, and all will call you 'Sir'. You may keep all the possessions you find, and that includes an amulet that has the power of increasing all your attributes!! Since this mission is quite difficult you will have the advantage of leaving the castle and returning to the Main Hall to heal, without disturbing the castle."

The gnome says, "Good luck!" and disappears into a cloud of smoke. 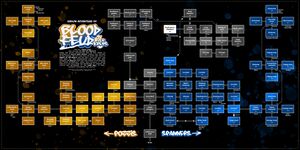 A map of Blood Feud Castle

Blood Feud Castle is a roughly symmetrical structure, each side consisting of a set of interconnected rooms mostly arranged around a long, east/west corridor that ends in a three-level tower. The west half of the castle is the territory of the Pozzis and the east that of the Spanners, but though the dwarf makes point of explaining the rivalry between the two groups in the introduction, it doesn't have any bearing on completing the game.

This walkthrough describes a route through the castle that lets you collect important items in a logical order and gather all possible allies, but it doesn't include every room or enemy encounter. If you wish to completely clear out the adventure, the accompanying map shows the locations of all monsters and artifacts.

You begin on a cobblestone path leading north to the castle: step inside, defeat the guard, then go north into the castle's Great Hall where you can collect some valuable metal plates. Return to the entrance.

Begin with the west wing (the territory of the Pozzis).

"Sitting in a chair is Margaret Thatcher knitting a Union Jack."

You're now outside in the gardens behind Blood Feud Castle.