Amateur Alley is an adventure written by John Nelson in 1983 for his Knight Quest game system. The adventure is a relatively simple outing intended for new players and is the equivalent of The Beginners Cave in Eamon. Tom Zuchowski included the adventure on the Eamon CD in 2000.

Frank Black converted the adventure to Eamon in 2003.

In notes included with the adventure dated 17 December 2003, Frank Black describes the process of converting Nelson's adventure to Eamon:

I extracted it from a disk image on the Eamon CD using ApplePC by David Ellsworth and converted it to Eamon Deluxe using my own conversion programs. After the text was reformatted and the adventure standardized, I used the program Dsk_in by Tom Baker to put it onto a DSK image and reconverted it back into an Eamon adventure using some more of my own programs. I used disk images of the Apple II programs Copy II+ 9.1 by Central Point Software and Double-Take by Mark Simonsen (Beagle Bros) to finish it up.

The Main.Pgm is based on an Eamon 8.0 system I developed in the 1990s. Eamon 8.0 had a version 6 counterpart, and I felt it suited John's adventures more.

As you were wandering around a town called Nell-Zon near the Main Hall, a seemingly crazy old man approached you. Half of his utterings were not coherent, but he was saying something about "hidden treasure right in the alley". He also was going on about wealth to be had just for rewards and bounties for some characters hiding out in some old buildings.

You're sure the old man must have escaped from a local booby hatch, but you decide it can't hurt to check out some of these stories.

You do remember something about a poster in the bank giving a reward for recovery of some counterfeit gold coins, so maybe there is something to the old man's tale after all... 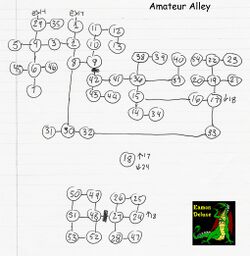