Stronghold of Kahr-Dur is the first of two Eamon adventures written by Derek Jeter.

You are milling about the hall of free adventurers when the burly Irishman approaches. "A raven just arrived carrying a message for you," he says grimly. You take the piece of parchment from him and read the hastily scribbled letter. It is from your brother, Jollifrud, who lives in the wealthy city of Fahrnor.

He states that a terrible menace has haunted a long-abandoned mountain fortress, known as Kahr-Dur, that overlooks the town. This unnamed menace has been quietly kidnapping the city's denizens during the night which has led to a general state of fear and anxiety. Even worse, Jollifrud's daughter Lady Mirabelle is among those who have been seized. He begs you to journey to Fahrnor and help him rid the city of this great evil once and for all. Your brother was once a great adventurer but has since retired after making his fortune plundering the great haunted tombs of the kings of old. The chance to stand next to him again in glorious battle is very tempting indeed.

You decide to set out for Fahrnor to help your brother and, after a week's journey on horseback, you arrive. A sense of doom pervades the city. Homes and shops are shuttered up and the usual bustle expected of such an opulent metropolis is nowhere to be found.

Jollifrud greets you at the gates to his spacious home. He says there is no time to waste and you both set off for Kahr-Dur to confront its resident horror... 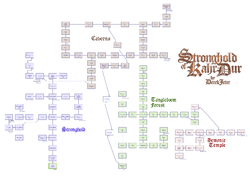 A map of the stronghold and its environs.

The adventure's introduction describes the journey from Evenhold to the city of Fahrnor as taking a week on horseback. The distance this represents would be affected considerably by conditions and terrain, but at 25 miles a day the journey would be roughly 175 miles.