The Beginners Cave is an Eamon adventure written by Donald Brown and publicly released probably in late 1979. The adventure is the first of the Eamon series, Brown having included it on the original Eamon Master Diskette along with the Main Hall, and serves both as an introduction to the game for new players and as an easy means for beginner characters to obtain some modest treasure and experience.

In his Eamon Dungeon Designer's Manual, Brown notes that The Beginners Cave follows the style of Colossal Cave Adventure by Will Crowther, a seminal text-based computer game released two or three years earlier that takes place largely underground in a complex system of interconnected tunnels and chambers filled with magic, treasure, and enemies borrowed from the world of fantasy literature. Many of these same characteristics are also present in Dungeons & Dragons, a role-playing game Brown played in the late 1970s with Bill Fesselmeyer, the friend who first encouraged him to create a computer-based role-playing system. Brown's Cave was likely shaped by both these influences as well as others, and in incorporating some of their characteristics into his first adventure he established a norm for Eamon stories that many later authors would follow.

Brown developed The Beginners Cave alongside the original Eamon system and released them together on the Eamon Master Diskette probably in the latter part of 1979. Other authors have since created several more beginner adventures, including Alternate Beginners Cave by Rick Volberding and Amateur Alley by John Nelson (the latter originally created for Nelson's Knight Quest and later incorporated into Eamon). Brown himself created another beginner adventure entitled The King's Testing Ground in 1981 for his commercial adventure game SwordThrust.

"To the north you see bright light streaming in from the outside." (Carlsbad Caverns, New Mexico)

The Warlord has set up a simple adventure in a cave south of the Main Hall for the purpose of giving new adventurers a chance to try out their skills. The Warlord stocks the cave daily with monsters and treasure, and has posted at its entrance a knight marshal, William Misslefire, to ensure that only beginners armed with a single weapon venture inside.

You "borrow" a horse and, following several signs, make your way to the Beginners Cave for your first adventure.

The cave is a simple, easy outing for new adventurers: it consists essentially of a single long tunnel flanked by various side-chambers and a single hidden side-corridor, and is populated with easily-beatable opponents and a few modest bits of treasure. Simply proceed south into the cave and explore each side chamber as you come to it, attacking (or befriending) the monsters you meet and gathering whatever artifacts you find. It is recommended that you pick up the bottle of healing potion which is located in the first western chamber, since if you find your health running low you can always restore it by drinking some. As you continue south, there are two particular hazards to watch for: a chest which when opened becomes a tentacled creature called a mimic, and a book which when read will magically transform you into a small and very short-lived fish. The mimic guards a treasure item so it's worth triggering and slaying despite being one of the harder battles, and the book counts as a treasure item.

Where the tunnel becomes "very broken and rough", look for a hidden side-tunnel to the east — it leads to a temple where you can free Cynthia, the kidnapped daughter of a Duke. Cynthia will follow you, and if you return her safely to the Main Hall you'll receive an added reward: a number of gold pieces equal to ten times your charisma. 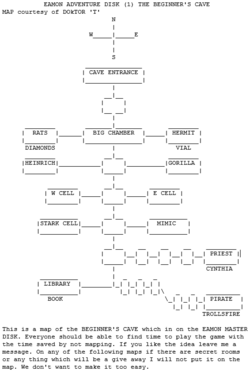 The tunnel will ultimately turn east and descend, and you'll emerge outside on the shore of an ocean cove where a pirate is waiting by a boat. Attack and defeat the pirate and take his weapon, the magical sword "Trollsfire". The sword features a special magical attack invoked by saying its name (though since it's located at the end of the cave there may be few opportunities to use it in the adventure).

You can also meet an amusing and sticky end if you read the book to transform into a fish at the seashore, and though this doesn't add to the game it is a very nice note to Donald Brown's care that he did consider people trying this and added some appropriately special text. Your work is done. Walk back through the cave the way you came and return to the Main Hall.

The Eamon Deluxe version of the cave is exactly the same, except that Frank Black added a few new bits of description, particularly to dead bodies.

Luke Hewitt, reviewing the adventure in the July 2012 edition of the Eamon Deluxe Newsletter, describes The Beginners Cave as a reasonably good introduction to the Eamon system, calling it very simple and "a little sparse" but praising the adventure's special effects.

The Interactive Fiction Database gives the adventure an average rating of 3 stars out of 5.

The Beginners Cave is not far from the Main Hall; the route to it leads generally south and is marked with signs. In his short placeholder adventure The Waiting Room, Frank Black describes the route as a "worn road" and notes that the Haunted Apple Grove lies just west of the road. The cave goes south into bluffs near a rocky cove on the sea.

John Nelson expanded and updated Brown's adventure to create the Enhanced Beginners Cave, which contains 11 more artifacts, 11 more rooms, and 10 more monsters than the original. The cave is also revisited and parodied in the first part of Robert Parker's Bookworm 3-D. Tim Berge's adventure The Caves of Eamon Bluff also revisits the Beginners Cave from the perspective of an adventurer returning to their own beginnings.