Not to be confused with The Lost Island of Apple.

The Lost Isle is an Eamon adventure written by Robert Davis and released in June 1990. The adventure is an adaptation of the AD&D module The Lost Island of Castanamir, written by Ken Rolston and published in 1984 by TSR.

The Lost Isle and Quest of the Crystal Wand are the two Eamon adventures written by Robert Davis (not to be confused with Bob Davis). Although written by Davis, the main program indicates that The Lost Isle was "converted to Dos 3.3" by David Cheever on December 18, 1989. There is no ProDOS version of Isle; this suggests that the adventure may have originated as a non-Eamon text adventure.

The Lost Isle begins with the adventurer overhearing a pair of wizards debating the existence of an island off the eastern shore of a local sea. They suggest that this island was the island home of the wizard Castanamir, who disappeared along with his home—and treasure—two hundred years prior to the setting of the adventure. The wizards, satisfied that the island exists, set off to loot it; naturally, the adventurer recruits a pair of mercenaries—a dwarf and an elf—to accompany him or her, plotting to beat the pair of wizards to the island. 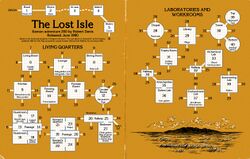 Castanamir's island home is easy to reach by taking the road east to the shore, then sailing the small boat east to the isle with your companions. However, most of the wizard's underground chambers are linked by one-way magical portals that connect in unintuitive ways that make navigation difficult; for example, if you enter a room by going south, returning north may not take you back to the original room.

Since the mission established in the introduction is to loot the wizard's treasures, this walkthrough will allow you to collect all the most significant or valuable artifacts in Castanamir's home but does not take you through every room or encounter. If you wish to see everything, use the map to find your way around.

Once on the island, begin by descending the stairs and collecting the torch.

The first level of Castanamir's home consists mostly of living quarters, starting with a green living room. You can progress through the first few rooms in order by exiting north from one to the next, but the exits in other directions (including back south) are not intuitive.

You're now in a short hallway with exits in all directions.