Curse of the Hellsblade is an adventure written by John Nelson in 1983 for his Knight Quest system and later adapted by Tom Zuchowski for use with the standard Eamon game system.

It happened one day that you chanced upon a wondrous sword of black metal. This sword had a marvelous edge that did not dull, and it sang eerie melodies as you tested its edge against nearby saplings.

But hold! You cannot put the sword down! Try as you might, your hand will not let go of the hilt! The most you can manage is to pass it to your left hand, thus freeing up your sword arm for other weapons.

Later that same day, you met up with a small band of companions, and showed them your new-found dilemma. One of the band who had some knowledge of such swords, told you that he recognized it as a weapon of Hell, and told you of a cave that is reputed to hold the key to lift its curse.

You listened closely as he told you how to find it. Perhaps you can find the answers to your problem there. Still, it is a marvelous sword, and you could do worse than be saddled with such an obviously magical blade. Your friends watched with interest as you readied it and prepared to demonstrate its edge on a nearby tree limb.

As you took aim at the limb, the sword began its strange song. You felt a tremendous surge of strength flow into your arm as you severed a 6-inch limb with one blow! And then, even before you knew what was happening, you swung about, and you watched in horror as the sword slew all of your friends! Its song grew deeper and stronger as it tasted the blood of each.

Even though you struggled with all your might, you could not control your body until all were slain! The sword pulsed with power, and seemed to be chuckling to itself.

You realized then that this blade is more than just cursed, but must in fact be possessed by a demon. And if that wasn't bad enough, you had a great deal of difficulty getting the black sword to let go of your sword hand so that you could transfer it to your left one.

It's clear that the sword is stronger than you, and if it drinks much more blood it will control you completely. Apart from that, it simply won't do to go about slaying everyone that you meet. Without a doubt, you must find that cave and rid yourself of the Curse of the Hellsblade!

This walkthrough takes the player through every section of the caves in an order that maximizes the likelihood of collecting and keeping potential allies and minimizing backtracking. A similar walkthrough written by Tom Zuchowski was published in the December 2000 issue of the Eamon Adventurer's Guild Newsletter. 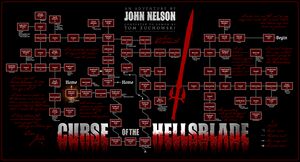 With the mighty Hellsblade in hand you're nearly unstoppable, but the sword has a mind of its own and will cut down friend and foe alike, so your first priority is to find a means of controlling it. Note that though there are occasionally hidden exits, there are always hints in the room description pointing to them, so it's not necessary to check every room for secrets.