Cliffs of Fire is an Eamon adventure written by Wade Clarke.

In March 2009, Matthew Clark announced on the Eamon Adventurer's Guild website that three adventures written by Wade Clarke in the "early 90s" had been recovered by Clarke and submitted to the EAG. The LAST UPDATE file on Cliffs of Fire indicates that it was written before November 1991, making it the earliest of the trilogy.

The premise of Cliffs of Fire is that a "renegade priest" Elrem has stolen a magical artifact—a white scepter—from the city of Kathros on the western corner of the continent. It is suggested that the scepter somehow maintains order in Kathros, as its theft has the result of the city plummeting into crime and chaos. Elrem has fled south and constructed a fortified tower on the southern cliffs—the eponymous "Cliffs of Fire," and the High Priest of Kathros has come to the Main Hall to entreat the adventurer to assist. In addition to the recovery of the scepter, an implied, secondary quest involves the rescue of a number of Elrem's captives: an elf, the magician Marcus, and his apprentice Helena.

The adventurer is delivered to and extracted from the Cliffs of Fire by a boat piloted by Kathros' priests. The player will be criticized—but allowed to depart—if he or she attempts to return to the Main Hall without the scepter and granted 2,000 gold pieces if the scepter is successfully recovered. 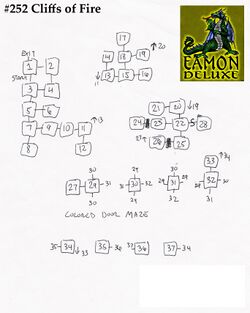 The review in the March 2012 issue of the Eamon Deluxe Newsletter states that, although the adventure is relatively short, the writing of Cliffs of Fire is above average and indicates the talent more fully realized in Clarke's more ambitious Dawn of the Warlock and The Prism of Shadows.